A successful partnership is built on five pillars: open communication, accessibility, flexibility, mutual benefit, and measurable results. Over a ten-year period FAW Trucks has built such a partnership with the BHL Group and today, both companies are reaping the benefits as their representation, impact and success on the African continent continue to gain momentum. 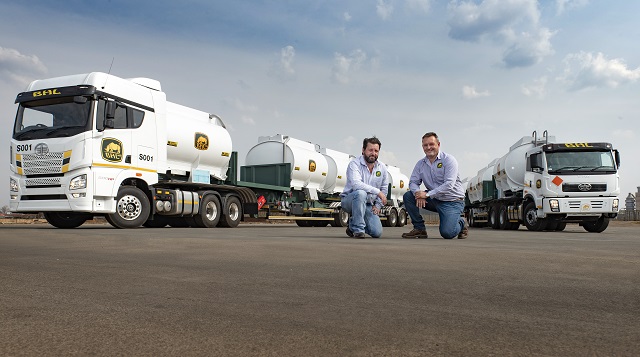 “There is a very strong synergy between the local FAW Trucks operation and the BHL group,” says Yongjun Li, CEO of FAW Trucks SA. “Both companies have a proud local heritage, as well as an enviable reputation for being able to recognise the needs and potential of the African market and catering to that. As a result, both have prospered.”

From humble beginnings to local success

In 1994 Richard H Leiter recognised the potential of bringing an affordable and durable Asian product with an impressive pedigree and rich history to the South African market. Partnering with the FAW Group Corporation, China’s oldest and largest vehicle manufacturer, his aim was to offer local buyers vehicles that would have the durability and longevity to last in the tough African environment, but would also be affordable and would offer low cost of ownership.

Thus FAW Vehicle Manufacturers SA (PTY) was born, with the FAW Group Corporation as majority shareholder. Since then, FAW Trucks SA has firmly entrenched itself in the local commercial vehicle landscape.

The BHL story starts is 1996 when brothers Buks and Pieter van Rensburg established their business in Johannesburg and Swaziland. Initially, they used two trucks owned by an in-house contractor to transport timber and sugar from Swaziland to Johannesburg, and cement and cooking oil from Johannesburg to Swaziland. Soon a second sub-contractor, Kapp Transport was hauled in and today Jacques Kapp, the son of that sub-contractor is the technical manager of the BHL Group.

Satisfied that they had achieved their goals in South Africa, the Van Rensburg brothers sold the local arm of the business and turned their attention to Zambia. What started as a contract to run five side tipper trucks between Ndola in Zambia and Lonshi in the DRC, has since ballooned into an operation that employs 1 000 people in four countries.

Today the BHL Group owns 330 trucks and manages an additional 300 belonging to sub-contractors and operates in Zambia, the DRC, Namibia, Botswana, South Africa and Zimbabwe. The Van Rensburgs are the majority shareholders, Buks being the CEO and Pieter occupying the position of COO. The other two shareholders/ directors are Elrick de Klerk (CFO) and Duncan Dukhi (CMO).

“Thanks to an extraordinary management team that handles the day-to-day running of the business, BHL has acquired a reputation for nurturing long-term relationships with our employees, customers and suppliers,” says Buks.

As one of those suppliers, FAW Trucks has an equally firm foothold on the African continent as it prides itself on providing trucks that are built in Africa, for Africa.

”Much the same as the BHL Group, FAW Trucks strives to ensure that we build long-term relationships by providing our customers with dedicated service and support of the highest quality,” explains Li.

Innovation as the cornerstone of success

In African markets, customers expect their trucks to withstand a rough operational environment, but also expect the vehicles to be fuel efficient, lightweight and technologically advanced.

With the FAW Group Corporation – China’s oldest and largest vehicle manufacturer – as its majority shareholder, the local operation is able to provide South African customers with products that have been researched and developed to excel in even the harshest working environments, without compromising technology and innovation.

Innovation is also very much part of BHL’s DNA.

In 2011 Buks came up with the idea of a dual-purpose trailer and in conjunction with Henred Fruehauf (SA Truck Bodies) the concept of a copper concentrate tipper combined with a sulphuric acid tanker became a reality. This has since also morphed into a trailer used to transport fuel and manganese.

Building on this idea, design work on the first-ever fuel tanker/copper flatbed link trailer commenced. After many years of planning, the final product is now being used between Botswana, Walvis Bay and South Africa.

“We are understandably proud of this innovation, particularly because of the great benefits it offers in terms of carbon footprint, road congestion and generating additional revenue,” Buks boasts.

Firstly, because all fuel tankers normally travel one way loaded and return empty, the environmental impact of creating backloads on the dual trailer is tremendous. By working more efficiently, less harmful CO2 is emitted into the atmosphere.

The second benefit is that, by running loads both ways, the trailers will have a huge impact on decongesting already over-congested roads in Africa, and the rest of the world.

Providing financial benefits for its customers is just as important to FAW Trucks.

“Overall lifetime costs on FAW models are crucial to the good reputation of the brand in South Africa. We have come to realise that low initial capital outlay and sound build quality, backed up by dependable service and parts supply are important, as is low fuel consumption,” says Li. “Because our products tick all these boxes, they have become very popular with truck owners who appreciate overall value for money.

“This is especially true in a challenging economic environment where transport and logistics operators seek to expand the scope of their fleets in order to capitalise on all available opportunities.”

BHL has certainly capitalised on opportunities in the African market and as has many noteworthy achievements and firsts to its name.

In 2004, at the Bwana Mkuba mine in Zambia, the company put into operation the first-ever three-axle side tipper double bin and in 2006 it started using the first side-tipper links in Zambia. This year it achieved another major milestone by becoming the first company in the world to use the dual fuel/copper link trailer.

The Van Rensburgs insist that the formation of their partnership with FAW Trucks is also worth mentioning as, in 2012, BHL became the first Zambian transporter to use vehicles from FAW Trucks.

Since that initial purchase, the BHL CEO has sung the praises of FAW Trucks on numerous occasions and insists that the products from FAW have played a significant part in the success of the company. “FAW listens to its customers,” he says. “It is always open to suggestions on how to improve its products and service and will put a great deal of time and effort into effecting those improvements.

“Another major achievement for us came in 2017, when we commenced with the construction of a new road from Zambia to Walvis Bay, which shortened the route by some 220 km. This was a corporate social responsibility project for us as there was no financial assistance from government,” Van Rensburg explains. “Our efforts have paid off, though, as it has helped to grow our market share to around 60percent along the corridor.”

In 2012 the decision was taken to establish a local manufacturing plant in Coega, Gqeberha (Port Elizabeth) and the first vehicle rolled off this assembly line in July 2014. The facility was built at a cost of R600 million and spans some 30 000m² and has, to date, assembled more than 7 000 units.

Further good news was the fact that FAW Trucks took the top spot in the heavy commercial vehicle segment of the local market for the first time in the first quarter of this year.

This year, BHL launched a new operation in Botswana, transporting copper from the north-west of the country to Johannesburg and Walvis Bay. A new company, Bulx Group Botswana, was also registered as Botswana offers various benefits – including economical and political stability – to investors. This diversification is aimed at expanding the company’s operations along the Trans Kalahari corridor.

Because of the limited loads back to Botswana, it was decided that the dual fuel/flatbed link trailers would be ideally suited for the operation.

Further diversification came with the commencement of operations along the Durban corridor via Botswana.

“Once again we have pioneered a game changing strategy,” says Buks. “We use our Zambian fleet with Zambian drivers up to the Mafikeng border. From there we switch to our South African fleet and drivers to transport the copper to Durban without passing through Gauteng, which is a high-risk hijacking area.”

To cater for this expansion, the company acquired 35 additional FAW J5N 28.380FT units to transport the roughly 5 000 tonnes of copper it expects to transport. As before, the hardiness, driver comfort, accessibility and price of spares and excellent fuel consumption offered by FAW’s trucks were deciding factors in the purchase.

Likewise, FAW Trucks also continues to expand in order to keep up with market trends and in response to customer requirements.

A prime example is the recent introduction of the 8.140FL-AT. This new model is fitted with a Euro 3 Cummins ISF 3,8-litre engine, an Allison 1000 six-speed automatic transmission and a full air dual circuit WABCO braking system with ABS.

The brand was also successfully relaunched in Namibia earlier this year, bringing its count of dealerships and service centres located in Southern Africa to 29.

With the recent inauguration of His Excellency, Mr Hakainde Hichilema, as Zambian president, both BHL and FAW Trucks have expressed renewed confidence in the potential of markets on the African continent.

“The Zambian currency has already strengthened against the US dollar and we are confident that with the new government’s vision and policies, Zambia will emerge as one of the top five African countries in the next ten years,” the BHL CEO comments.

“It was heartening to see the example the Zambian people set for the rest of Africa by exercising their democratic rights at the polling station in order to oust a regime they believe had let them down.”

Of course this renewed enthusiasm is also good news for FAW Trucks.

“FAW Trucks is, and will always be, committed to Africa and its people. As China grew then, so will Africa grow now, and FAW Trucks is ideally placed to benefit from the increasing demand for vehicles on the continent,” says Li. “We are committed to expanding our dealer and service footprint accordingly and we will continue to consider opportunities to expand our presence across the African region.”

A match made in heaven

BHL and FAW Trucks have been in partnership for some ten years and in that time FAW Isando has been BHL’s port of call for all its purchasing, servicing and maintenance needs.

FAW Isando was established in 1994 and has consistently been the top-performing dealership for the brand, priding itself on building strong relationships with its customers by providing great service through all levels of the buying and ownership experience.

“FAW Isando has proven time and again that it places a high premium on forging long-term relationships with its customers. BHL expects dedicated service and 24/7 support, and dealer principal, Johan du Plessis and his team have consistently gone above and beyond the call of duty to ensure that all our needs are met,” the Van Rensburg brothers say.

“Since we bought our first FAW trucks in 2012, we have been impressed by their ruggedness, durability and value for money. They are extremely well suited to the harsh working conditions on the African continent, while the availability of parts and the willingness of staff to address the needs of customers provide additional peace of mind.

“The newly-elected President of Zambia is quoted as saying that the past is behind us and what was done was done. He has encouraged fellow Africans to build a better future from now going forward. This is a sentiment we can appreciate as our company continues to move forward and we look forward to having FAW Trucks by our side every step of the way.”

Concludes Li: “FAW Trucks believes in the potential of the African continent as well as that of BHL. At the same time, BHL has believed in us. Together the two companies have expanded their footprint across Southern Africa and the partnership will continue to stand us in good stead into the future.”