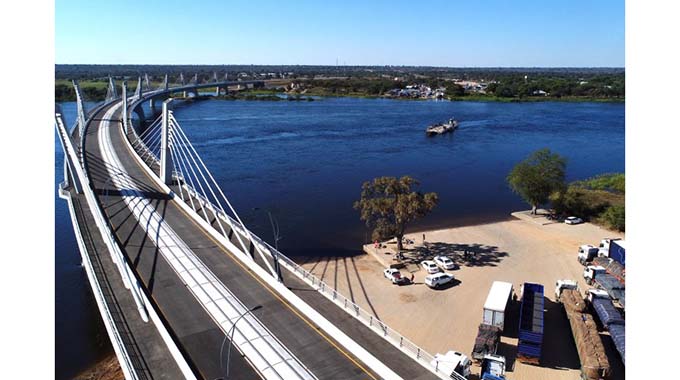 An aerial view of the newly built Kazungula bridge over the Zambezi river in Kazungula, Botswana.

There have been some doubts expressed over whether Zimbabwe’s late buy-in into the new Kazungula Bridge across the Zambezi was a worthwhile investment, especially considering that Botswana and Zambia had previously committed themselves to paying for the bridge as they agreed a second north-south corridor across central SADC was necessary for their development.

But the Zimbabwean investment was both necessary and in the end will benefit the Zimbabwean economy, at least once the road from Victoria Falls to Kasane in Botswana is upgraded, and that is now a priority. There is room for a second link road from “Crossroads” going west to allow the new development now underway in Matabeleland North to have access to northern Botswana.

The pay-back time will not be instant, but every addition to the communication networks in Southern Africa, especially when they are through large swathes of previously neglected territory, will generate wealth by giving access to markets and trade. And that particular corner of Africa, north-west Zimbabwe, south-east Zambia and north-east Zimbabwe is poor in communication links and development.

One major factor in the decision to buy into the bridge, rather than just let the two neighbours carry the burden alone, must have been the need to ensure Zimbabwe has access to the new major route, and then has access to the new road system across northern Botswana and then to the major east-west highway across central Namibia, the main urbanised portion of that country, that runs through Windhoek and down to the sea at Walvis Bay.

By being involved, Zimbabwe is shaking off its deadbeat image, partly justified by our economic troubles in the last 15 years of the First Republic, and making it clear that it takes the economic integration of Southern Africa seriously.

For example, at some stage within the next decade, Zimbabwe and Zambia are going to have to sit down and work out how to bridge the Zambezi at Kanyemba, the centre of new Zimbabwean development investment in the lower Zambezi Valley, and that means Zambia must be willing to not only look at a bridge but also at its road network in its south-western and western territory.

Talk is cheap, but now that Zimbabwe has shown it is willing to discuss action, and put up money for action, the discussions can be productive on both sides of the river and national development plans can be linked.

Botswana is almost fanatical about infrastructure, and with good reason. It was a very poor country until large diamond finds were exploited. But a lot of that diamond money has been spent on roads and bridges, rather than on hand-outs that are spent without any gain. Besides the old colonial highway near the eastern border with Zimbabwe to Francistown and Plumtree, now being upgraded to dual carriageway, the modern road network has been dramatically extended with two east-west highways that converge on the Namibian border.

While some benefit came through having links to Namibia, the bulk of the benefit has been within Botswana and especially on the northern loop road running from Francistown through Maun on the Okavango Delta to Ghanzi near the western border. While those three towns had some development they were separated by large swathes of very poor farming areas.

The highway allowed cattle farmers, and most rural Batswana are cattle farmers, a decent transport route to markets and the extra wealth generated has seen tiny villages grow as new businesses are opened and extended. The three towns are now separated by far more prosperous farming areas and a row of growing business centres. It is one of the major examples that the trickle-down theory of development works, with the Government putting in infrastructure and then allowing people and companies to use that infrastructure to make money.

Botswana Railways seems to have a planning section that dreams big. Two major lines are planned, the first across the Kalahari to Namibia and the second from the centre of a branch line that loops north and west from Francistown to Kazungula with the Zambians putting in a short extension from Livingstone to Kazungula. Zimbabwe can benefit from both lines.

There has been talk that the new north-south regional highway running from South Africa through Botswana, over the new bridge and into Zambia will divert traffic from the Chirundu-Beitbridge highway running through Zimbabwe.

That concern seems misplaced. For a start Zimbabwe is well advanced on the major upgrade of the Chirundu-Beitbridge Highway, with President Mnangagwa regularly commissioning sections. This highway, despite the regional traffic, is largely used by Zimbabweans, and especially Zimbabwean businesses, for internal traffic and access to the Zambian and South African markets.

The split in traffic will be decided by CFOs and so long as Zimbabwean roads are in decent condition and choke points eliminated the split will be purely on distances. This is the advantage of having a decent regional network instead of just the colonial network. We do not have to overload one route.

But the main immediate advantage of our investment in the new bridge is that we are entitled to link into the road networks and other infrastructure that Botswana and Zambia have developed to access the bridge. It is not just the bridge that is important, but the fact that those two countries have already extended highways to the bridge and Zimbabwe is now doing the same, as it is entitled to do as a partner.

Kazungula will obviously become a major centre, rather than three dusty villages, but as a partner the Zimbabwean town, next to the Botswana town and across the river from the Zambian town, will be part of that joint development and be the border post for rapidly growing trade between north-west Zimbabwe, northern Botswana and western Zambia.

One example. With the commissioning of the Gwai-Shangani Dam at the end of this year and the pipeline to Bulawayo at the end of next year we are talking about irrigation in Matabeleland North, which is fine but the farmers need markets for fresh produce. Where is the largest potential market, considering dry Botswana is now directing investment into the north?

Lupane until surprisingly recently was not much more than the old headquarters of the “native commissioner” where a lot of people were dumped. It is now well on the way to being developed as a university city and provincial capital. That will attract businesses, and they will want suppliers and markets.

We need to remember that you cannot look at what is there now when you put in a communications grid. The development follows the grid. Cecil Rhodes, for all his appalling power plays and land grabbing, understood this and his only remaining legacy is that railway backbone in Botswana, Zimbabwe, Zambia and the central waist of Mozambique. We have added a bit, the Tazara line to Dar es Salaam, the line to Maputo, Zimbabwe’s direct connections to Beitbridge and some branch lines, but the three landlocked countries developed around the original network and until very recently almost all our towns and all our cities were on that network.

So the importance of the new bridge is not so much that it is a bridge, but that it is a node of a new grid of roads, and a planned extension of the railway grid, that is opening up regions that were left behind and being the link between the new development that will result in all three countries. Our investment buy-in gives us access to that node point as a full partner. Now out business community has to plan on how it wants to use the new communication grid.