Halifax, Nova Scotia--(Newsfile Corp. - June 23, 2020) - Antler Gold Inc. (TSXV: ANTL) ("Antler" or the "Company"), is pleased to announce the further consolidation of its land holdings for the Central Erongo Gold Project ("the Project") through the acquisition of the Exclusive Prospecting License EPL 6408, (the "License" or "EPL") from a Namibian citizen on an arm's length basis with no finders fees (the "Vendor") through its Namibian wholly owned subsidiary Antler Namibia (Pty) Ltd.. EPL 6408 lies adjacent to the northeast of EPL 7261 which Antler has under option and is underlaid by the Kranzberg Fault (see press releases dated May 7, 2020 and May 14, 2020). See map below for the location of EPL 6408 and Antler's other land holdings in the area. 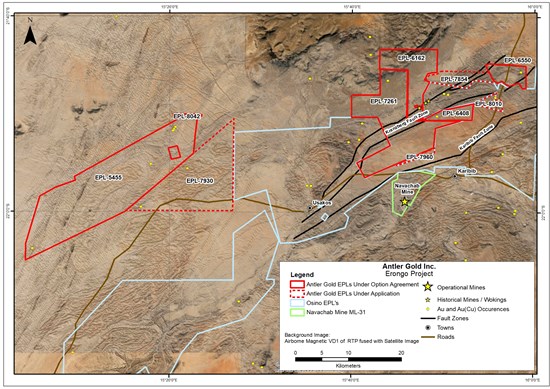 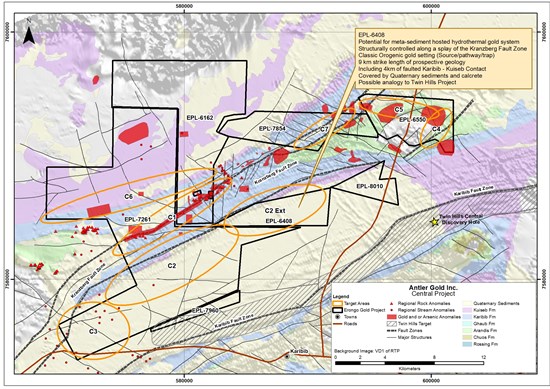 Pursuant to the Purchase Agreement, Antler may acquire an 85% interest in EPL 6408 by paying the arm's length vendor a cash payment of N$6,500 upon signing of the Agreement and paying a further N$25,000 upon the satisfactory completion of a 21 day due diligence period and finally payment of N$25,000 or issuance of C$1,500 (at Antler's option) upon the successful transfer of the EPL into a subsidiary of Antler Namibia (Pty) Ltd. Upon earning the 85% interest, Antler and the Vendor will enter into a standard participating joint venture agreement which shall contain terms providing that if the Vendor's interest is reduced to less than 10%, its interest will automatically be converted into a 5% free carried interest which can be purchased by Antler at any time for the payment of C$25,000 or the issuance of C$25,000 of Antler common shares. The decision to pay cash or issue shares will be at Antler's option.

The Purchase Agreement is conditional upon TSX Venture Exchange approval.

Peter Hollick, Pr.Sci.Nat., consulting geologist, is the qualified person as defined by NI 43-101 guidelines and has reviewed and approved this release.

Antler Gold Inc. (TSXV: ANTL) is a Canadian company, focused on the acquisition and exploration of gold projects in Namibia. Antler's Erongo Gold Project covers areas of the Navachab-Damara Belt, which is highly prospective for gold, and overlies similar lithologies and structures as the known Namibian Gold mines (QKR's Navachab and B2 Golds' Otjikoto) as well as the recent Twin Hills discovery. Antler's total license position now comprises five licenses (EPL 5455, 6162, 7261, 6550 and 6408) under option and a further five (EPL 7854, 7930, 7960, 8010 and 8042) under application, for a total landholding of approximately 85,341ha (853.41km2). Antler is currently focusing its efforts on advancing its Erongo Gold Project, which is located approximately 130 km north-west of Namibia's capital city Windhoek and benefits from Namibia's well-established infrastructure of paved highways, railway, power and water. Namibia is mining-friendly and lauded as one of the continent's most politically and socially stable jurisdictions. Antler continues to evaluate new ground with a view to expanding its Namibian portfolio.

Further details are available on the Company's website at www.antlergold.com

This press release may contain forward-looking information, such as statements regarding the completion of the transaction, including acquisition of EPL 6408 or any other EPLs in Namibia by Antler and future plans and objectives of Antler. This information is based on current expectations and assumptions (including assumptions in connection with the continuance of the applicable company as a going concern and general economic and market conditions) that are subject to significant risks and uncertainties that are difficult to predict, including risks relating to the ability to satisfy the conditions to completion of the transaction. Actual results may differ materially from results suggested in any forward-looking information. Antler assumes no obligation to update forward-looking information in this release, or to update the reasons why actual results could differ from those reflected in the forward-looking information unless and until required by applicable securities laws. Additional information identifying risks and uncertainties is contained in filings made by Antler with Canadian securities regulators, copies of which are available at www.sedar.com.