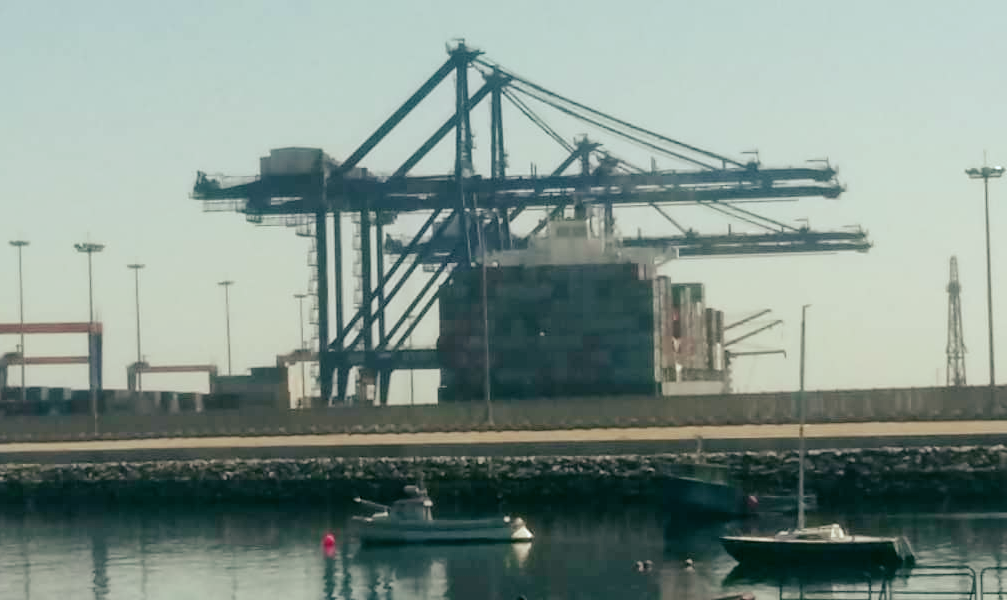 Pictured: A container vessel moored at the quay of the new container terminal in Walvis Bay where the new STS Cranes and improved systems caused a marked improvement in throughput numbers. – Photo: Niël Terblanché

WITH the commencement of operations at the new container terminal at the port of Walvis Bay a little more than a month ago the Namibian Ports Authority already saw a marked improvement in the numbers of containers handled.
According to Namport’s Commercial Executive, Tino !Hananbeb, operations at the new container terminal commenced on the 27 August 2019.
“Throughput for the month of September was 37 percent higher when compared to the average throughput during the first five months of our financial year. Although it is early days yet, this increase is a positive sign of customer confidence in our new facility,” he said.
President Hage Geingob officially inaugurated the container handling facility towards the end of July and the relocation of equipment to the new terminal and operationalization of the facility shortly afterwards went beyond expectation and Namport is on track in supporting government’s vision to make Namibia a logistics hub for the Southern African Development Community (SADC).
According to !Hanabeb the new terminal is fitted with state of the art Ship to Shore Cranes (STS) with the capacity to considerably exceed quayside productivity levels normally achieved by Mobile Harbour Cranes. He said STS Crane operations are supported by rubber tire gantry cranes (RTG’s) inside the container yard which provides improved stacking capacity and efficiency compared to reach stackers previously employed by Namport.

“In addition, our Terminal Operating System (TOS) was upgraded and includes new features that allows for yard and equipment optimization on a real-time basis in comparison with conventional style of yard planning and equipment deployment that was time consuming and costly. During the design and implementation phase of the project, all users underwent rigorous training to equip them with the necessary knowledge and skills to use the system effectively from day one. Moreover, we have an arrangement with the systems developer for 24 hour support in the event that such assistance is required.”
With regards to customer satisfaction !Hanabeb said Namport has already received compliments from many of their existing clients.
“They understand that as with any new project, a few teething issues will pop up in the beginning but they expect Namport to resolve these issues in the shortest possible time. We are working closely with our clients to resolve some of our operational challenges and gradually ramp up productivity levels over the next six months.”
He said Namport operates in a highly competitive environment where the speed at which initiatives are pursued and implemented will differentiate the new facility from competitors. Infrastructure development and modern equipment are but one of the factors that customers consider when choosing a port.
“To attract more volumes through Namibian Ports requires a concerted effort by all players in the logistics chain to embrace and implement new technologies to enhance the ease with which customers can do business in Namibia and along our transport corridors, consistently providing our customers with high productivity levels, affordable pricing, and safety and security of cargo,” !Hanabeb said.
He added that the Namibian Ports Authority looks forward to the increase in corridor volumes by at least 20 percent.
“The first vessel to be handled at the new container terminal was the RDO Favour and our moves per hour have picked up to 27 container moves per hour since. The container terminal facility is still new and presents a steep learning curve for all operational aspects but we look forward to more positive things coming through.
He referred to the utilization of the recently completed passenger liner quay and said Namport is looking forward to the increase in the number of passenger vessels that will be able to moor there.
In the previous financial year Namport had 12 passenger ships visiting the harbour, but according to !Hanabeb the number of passenger liners will increase four fold in the year ahead meaning the tourism industry at the coast will also benefit from the improved facilities.