Public-Private Partnerships: We can learn from Jamaica 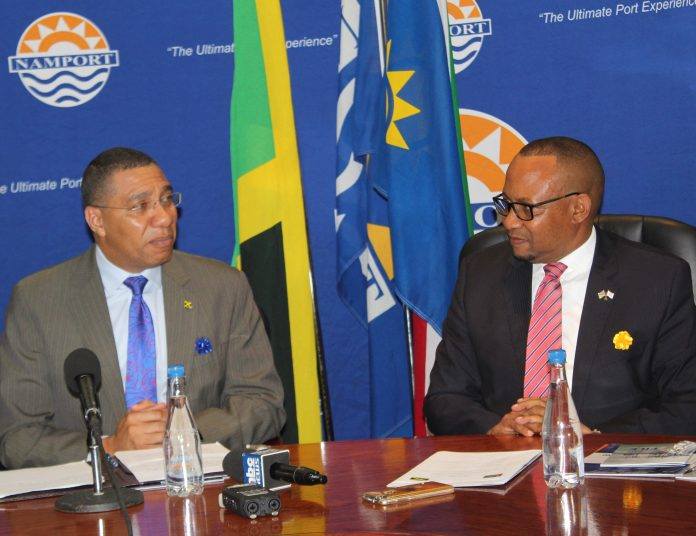 Jamaican Prime Minister, Michael Holness says his country has learnt valuable lessons on public private partnerships (PPP's) and views this as one of the preferred investment vehicles to develop major infrastructure.

That was the advice to Namibia this week by Holness during his three days state visit to Namibia. As part of this state visit Holness paid a visit to the port of Walvis Bay on Tuesday where he was received by the Chief Executive of Namport Mr Bisey Uirab and a delegation of senior port officials.

Although much impressed with the progress currently made with the completion of the container terminal on reclaimed land in the port of Walvis Bay, Holness said PPP's are crucial to large projects such as this. It relieves pressure on Government to finance such projects, it facilitates private investor funds, local job creation, improved efficiency in managing these assets and it introduces new technology and new methods.

Jamaica introduced PPP's through its development bank as well as ministry of finance and already completed several mega projects in conjunction with the private sector. These include the upgrade of the country's Sangster International Airport, the development of the East-West and North-South legs of Highway 2000 which is the road transport backbone of this island-nation.
Then also the Kingston Container Terminal expansion project where Jamaica expects to handle 3,5 million containers per annum. Jamaica entered into a PPP with Kingston Freeport Terminals Limited, an affiliate of French shipping company CMA CGM, for a period of 30 years. It led to an upfront capital injection of N$970 million and an annual concession payment of N$195 million.

According to Holness the Jamaican Government is capitalising on its strategic location in the Caribbean and said his country would assist Namport with expertise to reach its full potential as port hub for this part of the world.
Further Explained Holness: Jamaica has become a role model for several countries around the world since it implemented its PPP policy in 2012. That saw the country completing five major projects with a total investment value of about N$16 billion.
Namport CEO Bisey /Uirab said Namport can gain from the experience of Jamaica, specifically in the context of PPP's which is under consideration by Namport. Albeit in a very beginning stage
“We stand to gain from the Jamaican experience and their successful lessons”, said Mr /Uirab. Adding the Namibian Government should consider a Memorandum of Understanding with the Jamaican Government, to source expertise and guidance if Namibia goes into PPP's for ports management.
Holness and his delegation were also afforded the opportunity to see progress made with the construction of the new bulk liquid fuel discharge terminal and the bulk fuel storage terminal.