by Adam Hartman
The Namibian 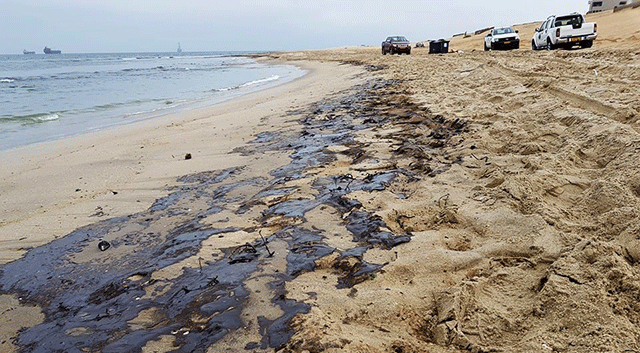 ONE or two suspected foreign vessels – one passing by Walvis Bay and one inside port limits – may have been responsible for the oil pollution at Afrodite Beach and Walvis Bay last month.

In a statement on Wednesday, the works ministry's spokesman Julius Ngweda said significant progress had been made in identifying the vessels.

“Using a combination of satellite images and an automatic identification system (AIS), we were able to focus our investigations on one or two potential sources.

“It may take a while to finalise the investigations and hold the offending party responsible as multiple jurisdictions are involved,” said Ngweda.

The Namibian understands that one of the vessels allegedly had its AIS turned off at the time of the spill, nor was any emergency signal issued from the vessel to inform authorities of a possible oil spill from the vessel.

This information begs an answer to the question whether the oil was deliberately dumped, if not an accidental spill.

This newspaper also understands that, while the AIS and satellite images were used, the two technologies will have to be synchronised to pinpoint the exact culprit to know for certain.

Ngweda said his ministry together with the navy and the Namibian Police's water wing, as well as Namport, is reviewing the procedures for allowing foreign ships to anchor within Namibian bays, ship-to-ship transfer operations as well as sharing of maritime domain information.

The objective of this review is to strengthen further existing risk control measures to ensure that Namibia does not become a haven for sub-standard shipping, according to him.

“Since the last spill, no new oil pollution has been detected or reported in the mentioned area or any other location at Walvis Bay. Likewise, we have not received reports of affected coastal or seabirds or other sea animals.

He added that the ministry is confident that all the oil spilt in this incident has been recovered through shoreline clean-up and natural weathering processes.

“Our beaches and biodiversity hot spots are clean and safe to enjoy for both locals and visitors alike.”

The spill was first reported at Pelican Point, which is a jut of land south-west of Afrodite Beach, and the following day oil was discovered below Afrodite Beach. Although it was minor and localised, it was enough to raise the alarm and also lead people from several agencies and institutions, which included the DMA, Namport, Walvis Bay municipality, and the Namibian navy and army to begin a clean-up of the beach.

A week later a second oil spill was detected at Walvis Bay Lagoon, although less acute. The lagoon is a major tourist site as it is a protected fragile ecosystem and internationally recognised Ramsar coastal wetland area.