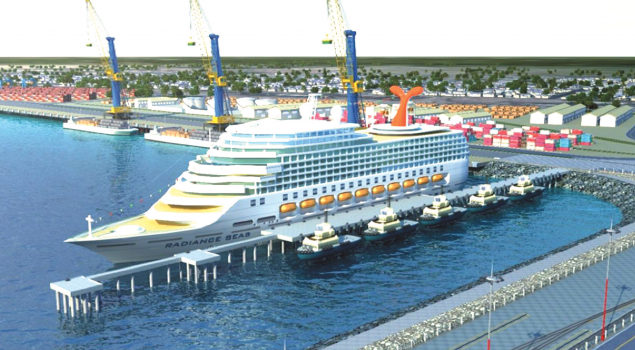 WALVIS BAY - A major link in the chain of events that will even­tually distinguish and establish Walvis Bay as the logistics hub of choice for the Southern African Development Community is fast nearing completion.

The Namibia Ports Authority confirmed by way of a report that the construction progress to the container terminal on 40 hectares of reclaimed land in the port of Walvis Bay is more than three quarters complete and is still on schedule to be officially inaugu­rated early in 2019.

The new container terminal or South Port Development as it is known is aimed at the quick turn-around of ships. The faster ships can be offloaded, resupplied and reloaded with other goods, the more attractive the port that has this capacity becomes to interna­tional shipping lines.

According to the latest report released by Namport yesterday, construction progress on the terminal consist of various aspects which includes the dredging works which stands at 97%, land reclamation at 95%, surface or ground improvement at 95%, construction of the retaining wall and storm barrier at 95%, paving at 10%, installing of essential services 30%, electrical feed 94%, new quay wall 77%, The construc­tion of the new administration block 65%, workshop space 70%, new jetty for passenger liners 90% and the new marina with its storm barrier at 30%. This brings the total of comple­tion of the new container terminal to 76%.

One of the major components in the completion process is the instalment and eventual com­missioning of four new ship-to-shore cranes. The giant cranes were acquired at a cost of N$110 million each. The new cranes are stationary and will differ vastly in capacity from the current ship-to-shore cranes used to load and offload containers from vessels alongside.

Namport has always used huge mobile cranes. Most modern ports however, make use of stationary ship to shore cranes. These cranes are far more productive than mobile cranes and as such ship turnaround times are much faster.