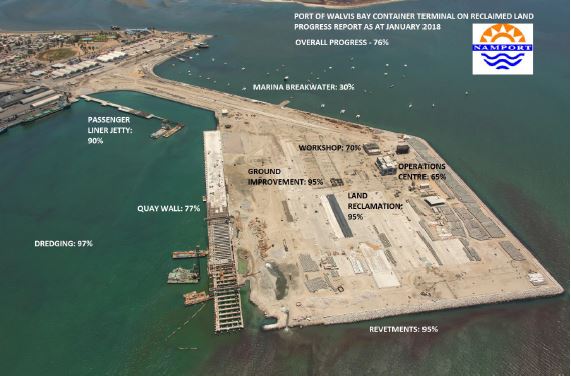 In an update on the progress of the terminal, Namport in a statement said the contract is on schedule for completion of most of the works at the end of 2018 with minor works to be completed early 2019.

One of the major components of the projects is the commissioning of four new Ship Container Cranes (STS), making it the first time that these cranes will be deployed in the port of Walvis Bay.

According to Namport, to date they have made use of mobile cranes to load and offload containers from vessels. The 4 STS cranes are expected to arrive from China on 10 February.

Meanwhile, the project commenced on 19 May 2014 and is being constructed by China Harbour Engineering Company Limited and once completed will have a throughput capacity of 750,000 TEUs (twenty foot equivalent units) per annum.

The new port will also be connected to the existing port’s road and rail networks as well as communication systems and is currently valued at N$3.44 billion.