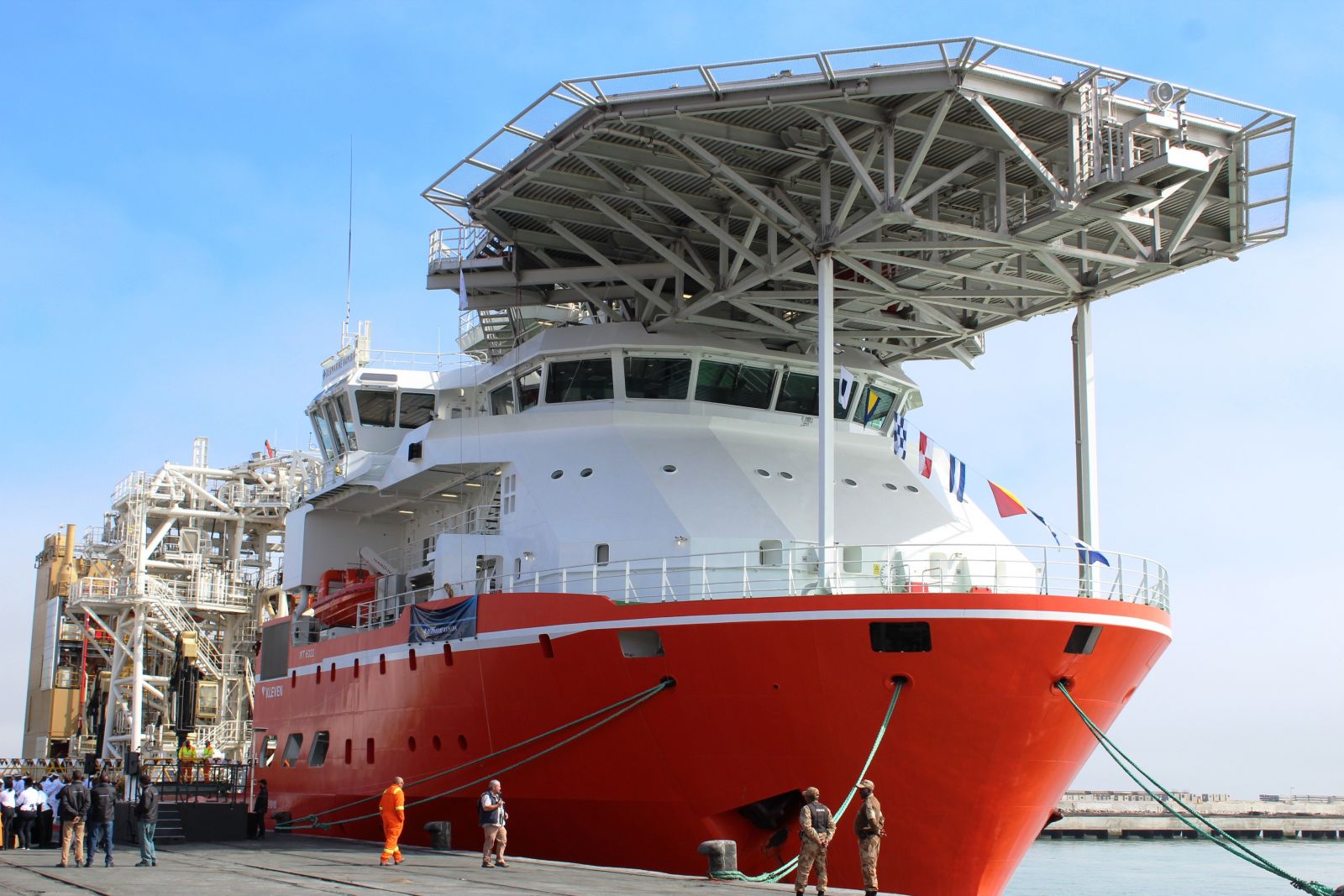 Founding Father Sam Shafishuna Nujoma, christened Namibia’s largest and most modern diamond vessel at the Port of Walvis Bay on the 15th of June 2017. Debmarine Namibia, a subsidiary of Namdeb, invested N$2,3 billion into the SS Nujoma, a deep water diamond exploration and sampling vessel.

Namport continues to upgrade and expand its operations in Namibia, meeting the demands of the national and international shipping communities across the globe. Projects such as the new Container Terminal, the North Port Oil Terminal and the Waterfront and Marina Development, supports the growth of Namibia’s economy, and enables entities such as Debmarine to expand their own operations. During the Inauguration and Naming Ceremony, Debmarine CEO, Mr Otto Shikongo thanked for investing the time and effort to make this historical achievement possible for Debmarine and Namibia.

The SS Nujoma is a diesel-electrical powered vessel, and equipped with a subsea sampling system and treatment plant developed by De Beers Marine South Africa. The sophisticated equipment on board can locate and determine marine diamond zones in the ocean bed. This makes it one of the most technologically advanced marine diamond sampling and exploration vessel s in the world.

The SS Nujoma is 113-metres long and weighs 12,000 tonnes, and was built by the Kleven shipyard at Ulsteinvik in Norway. It sailed to Cape Town in 2016 and was fitted with specially designed subsea sampling systems, according to De Beer’s specifications. The vessel then underwent a five-month long testing period, and was launched into water ahead of schedule on the 9th of January 2016. Other features on board the marine vessel include a desalination system, a helicopter deck suitable for a Sikorsky S61s and accommodation for a crew of 80.

The vessel is also fitted with a large drilling system capable of collecting 48 seabed samples a day. The process plant aboard the ship employs screening, scrubbing and other methods to upgrade the product. Resource mapping is performed using a side scan sonar, chirp sub bottom and airgun profilers, multi-beam echo-sounders, and autonomous underwater vehicles (AUVs). The vessel will support mining operations on the ocean floor at water depths between 90m and 150m.

The SS Nujoma will remain on exploration operations for three years before returning to port for maintenance. The sixth in the Debmarine Namibia fleet, it will be registered at the Port of Lüderitz, and will ensure sustainable diamond production levels long into the future.

His Excellency, Dr. Nujoma visited the new Container Terminal the following day, and was welcomed by our CEO Mr. Bisey /Uirab and Mr. Elzevir Gelderbloem, Executive: Port Authority. The Founding Father, expressed great satisfaction with what he had witnessed and applauded Namport, the contractors and all stakeholders involved, adding that such projects are key to the sustainability of our nation. This visit by the Founding Father equally bears much significance to Namport, because it was during his tenure as President of the Republic of Namibia, that discussions around the initial Master Plans for these two major projects commenced.