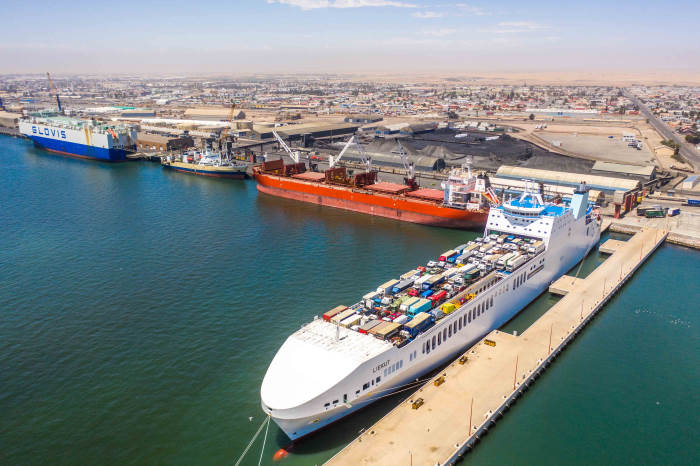 A view across the Port of Walvis Bay, with the passenger ship jetty in the forefront and a ro-ro vessel in occupation. The new container terminal is out of view on the left

There’s been a noticeable increase in the volume of salt exported via the Port of Walvis Bay, the Namibian Ports Authority (Namport) reports. See graph below.

On Friday 6 August this trend was particularly noticeable with two ships in port both loading salt destined for the Democratic Republic of Congo.

Both ships will discharge their cargoes of salt at the DRC port of Matadi.

Maria da Paz completed her loading and departed Walvis Bay on Friday at 15h48. She is due in Matadi, the Congo River port, this Wednesday 11 August.

The feeder-type container ship was built in 1999 and flies under the flag of Antigua Barbuda. She is 110.6 metres in length and 16.5m wide and has a container capacity of 378 TEU.

The general cargo ship Uniscout has similarly left Walvis Bay, on Sunday 8 August at 09h44 and is due in Matadi on Thursday 12 August.

Over the past four months Namport recorded a combined total (bagged and bulk salt) of 160,186 metric tons of salt exported via the Port of Walvis Bay to various destinations. 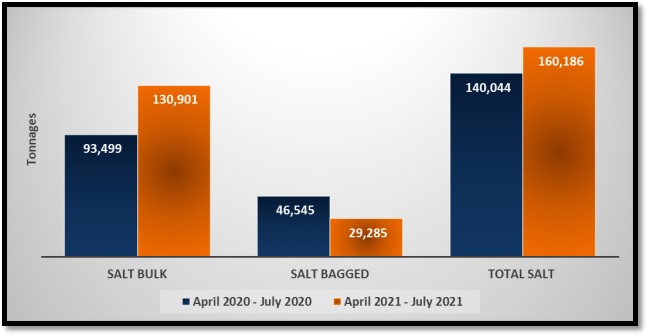 Graph showing exports of salt at the Port of Walvis Bay

An overall increase in the exportation of salt is observed on the graph above in comparison to the same period in 2020.

Another vessel worth noting on Friday was the container ship MEDITERRANEAN BRIDGE (IMO 9461506) which sailed on Saturday 7 August at 11h43 bound for Pointe Noire where she is due to arrive on Tuesday 10 August.

During her call at Walvis Bay a total of 1,674 container moves were completed, not a record by any means but still a significant number of containers to be handled at this port.

In June 2020 Mediterranean Bridge became one of the largest ships to arrive at the then new Walvis Bay Container Terminal where she discharged 1,781 TEUs and loaded 697 TEUs for a record of 2,478 TEUs handled on a single vessel at the Port of Walvis Bay.

The 102,518-dwt Mediterranean Bridge is flagged in the Marshall Islands and was built in 2011. Her container capacity is 8,586 TEU and the ship has an overall length of 335.63 metres and a width of 42.8m – quite an impressive sight in Walvis Bay.

The ship is powered with a single Wartsila diesel 2-stroke engine model 12RT-flex96C developing a total power of 58,344-kW or 79,325HP to turn a single fixed pitch propeller.

The ship is a Seaspan-owned and managed ship which appears to be currently operated by Maersk on their Asia, South Africa, West Africa service. Interestingly, the Maersk website shows the ship as Mediterranean Brid – missing the ‘ge’.