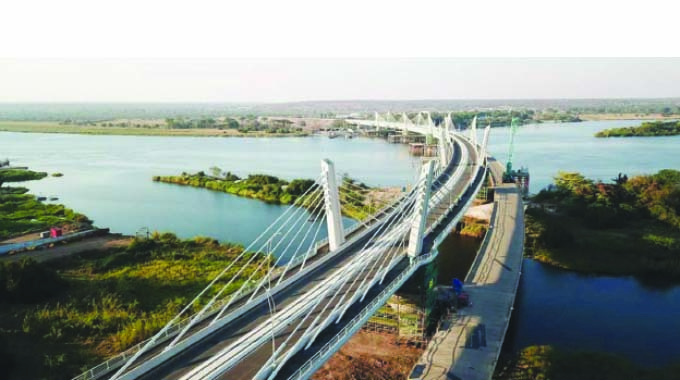 Kazungula Bridge and One Stop Border Post IS a flagship regional project that paves way for enhanced economic integration and development.

THE Southern African Development Community (Sadc) has described the Kazungula Bridge and One Stop Border Post as a flagship regional project that paves way for enhanced economic integration and development.

The US$259 million Kazungula Bridge over the Zambezi River and One Stop Border Post facilities connecting Botswana and Zambia were officially commissioned on Monday this week.

President Mnangagwa joined other regional leaders to witness the commissioning of the 929 m-long bridge and state-of-the-art facilities by his counterparts, Eric Mokgweetsi Masisi of Botswana and Edgar Chagwa Lungu of Zambia.

The colourful ceremony was held at the quadriphonic point across the Zambezi River where Botswana and Zambia meet Namibia and Zimbabwe.

“The Kazungula Bridge is expected to link the port of Durban in South Africa to the DRC and the United Republic of Tanzania through the North-South Corridor to facilitate seamless and efficient movement of goods and persons,” said Sadc in a post-launch statement.

It said the new bridge and facilities would help reduce cost of doing business, contribute to industrialisation, and enhance trade and Sadc regional integration.

“It will replace the age-old pontoon ferry, which was used to carry haulage trucks across the river.”

Sadc executive secretary, Dr Stergomena Lawrence Tax, said the new infrastructure was expected to link and smoothen the movement of people, goods and services not only between the two countries, but also within the entire Sadc region, including the Comesa-EAC-Sadc tripartite regions, and eventually African continent through the corridor approach.

“That it will facilitate physical transport and logistical linkages between, and among member States, movement of persons, goods and services in the Sadc region, thus contributing to the region’s desire to industrialize, create wealth and jobs for Sadc citizens,” she said.

Dr Tax said the Kazungula project replaces old technology, which was prone to disasters and accidents, with modern infrastructure and facilities.

“Indeed, this iconic bridge and the OSBP symbolize our unity of purpose, as we move ‘Towards a Common Future’, as per motto of Sadc,” she said.

“The Kazungula Bridge is a regional infrastructure project worth emulating.”

Detailed designs and construction of the bridge were jointly led and coordinated by the governments of Botswana and Zambia, and funded by the two governments, supported by the African Development Bank and the Japan International Cooperation Agency (JICA).

Regional presidents and economic leaders have also commended the project and hoped it will impact positively towards growing strategic regional economic and trade partnerships.