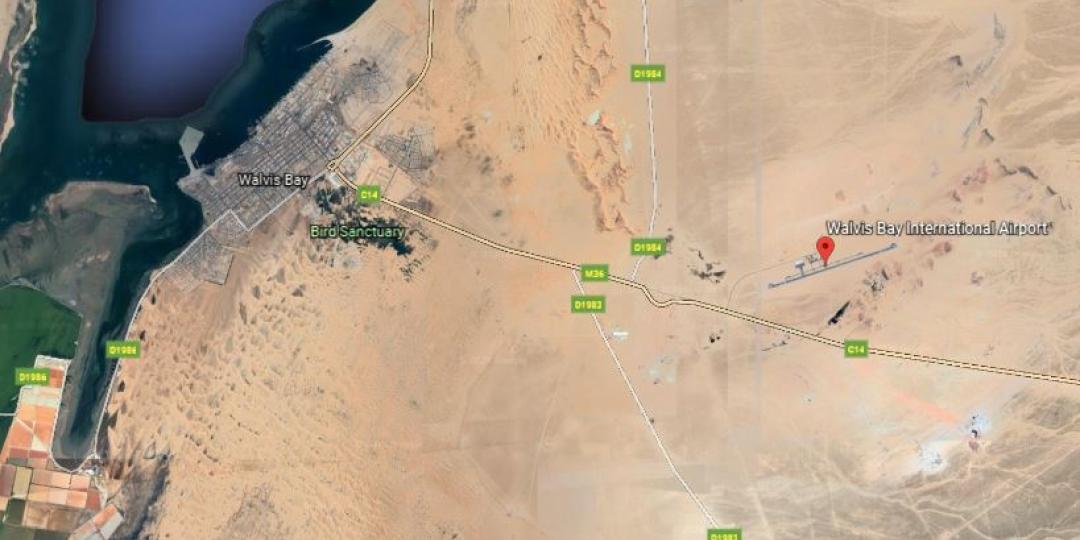 An aerial map of the Port of Walvis Bay and its international airport (red pin) near where the new cold chain facility will be built.

Namibia is on a drive to bolster its frozen food capacity at the Port of Walvis Bay with a new cold chain facility capable of storing 12 500 tonnes of exports and imports.

According to Robert de Villiers, acting managing director of Walvis Bay National Cold Storage, the R400-million development was commissioned by the Namibian Industrial Development Agency (Nida) in keeping with the country’s goal to enhance its fisheries industry.

“Our government has a policy to process fish on land but they can’t implement the policy because currently there’s no on-site freezing capacity.”

Existing cold storage facilities, such as they are, were not equipped to meet the country’s cold chain objectives, De Villiers pointed out, especially after the new port at Walvis was inaugurated in August 2019.

“It’s too small and you can’t get product out fast enough,” De Villiers said.

“The storage facility we’ll be building" – some three kilometres from the international airport west of Walvis Bay proper – "will be focused on first-world efficiencies.

“Although it’s more expensive to build, we guarantee getting a 30-tonne truck in and offloaded in under 30 minutes.”

The bigger picture of the 54 000 square meter facility's processing capability, De Villiers emphasised, was that Namibia would no longer have to export fish via Spain to leading Namibian fish importers like Brazil.

“We’ll be able to export straight to our clients in South America. We’re also looking at clients in Europe.”

According to De Villiers at least 75% of the facility will be concentrated on fish.

“However, we’ve also identified date and meat exports and chicken imports as possible beneficiaries of the new development.”

Construction of the facility is expected to begin in March, but could have started sooner had it not been for the disruptive effect of Covid-19.

“The company was conceived towards the end of 2019 after Nida approach us to drive this project,” De Villiers said, “but then the virus came.”

In the interim, available time has been used to make sure all angles are covered before Walvis Bay embarks on its next portside development.

“All the design work is finished, approvals are done, and we’re ready to turn the first sods in building the facility.”

Moreover, De Villiers and co have already identified that the new facility will have to be enlarged as soon as possible.

“Market potential necessitates ramping up capacity by a further 15 000 tonnes to 25 000. That will be a second-phase project we hope to initiate once the first phase is completed.”

Construction work on the facility’s first phase is expected to take 18 months.

As always there are challenges.

De Villiers said the current weighbridge would have to be moved to an area outside Swakopmund, some 35 kilometres north of Walvis Bay.

Irvaan Maharaj, SA-based business development manager for the Walvis Bay Corridor Group, whose responsibility it is to market the port and its logistical linkages, said the new facility would contribute significantly to the port’s potential.