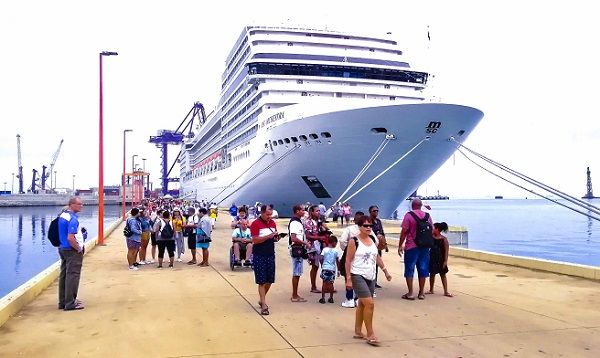 The mega cruise liner, the MSC Orchestra called at the Port of Walvis Bay on Wednesday for its more than 3000 passengers to disembark and reconnoitre the harbour town and its desert surroundings.

This luxury cruise liner is almost 300 metres from bow to stern, with a displacement of just over 92,000 tonnes.

As usual, the arrival of this large ship caused a big stir in the small community. Taxis started lining up early bringing vendors with their wares in the hope to sell something to the passengers while the taxis themselves jostled for the opportunity to take the visiting guests on a walkabout. But unlike previous occasions, the process was orderly and controlled by law enforcement officers.

This leg of the Orchestra’s maiden voyage started in Cape Town. The 6-day cruise will now take the ship back to Cape Town. The passengers were delighted with their Walvis Bay visit, many stating how impressed they are with the welcoming spirit of Namport’s staff at the onshore reception point. 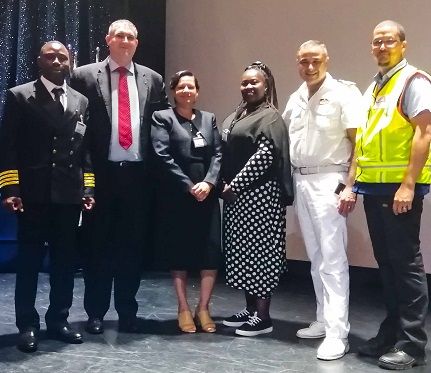 At a brief onboard presentation where the ship’s crew met the Namport authorities, the Managing Director of MSC South Africa, Mr Ross Volk, assured the locals that more MSC vessels will dock at Walvis Bay after this very pleasant first experience.

According to Volk, the excellent reception they enjoyed in Walvis Bay, contributed to Namibia’s positive image and it is fast becoming a preferred hub for maritime tourism.

“From the next season we will have two vessels based in southern Africa, one catering for the east coast and the other the west coast. So, instead of us only having two to three calls in Walvis Bay and Lüderitz, we will increase the number of calls to 22 from Cape Town,” he said.

Captain Lukas Kufuna, the Walvis Bay port captain, told the visiting ship’s crew that Namibia is strategically positioned and with the service of the newly-built passenger jetty, the ports authority is working to ensure that all vessels enjoys safe passage in Namibian waters and that all visitors are given the opportunity to appreciate what Namibia has to offer.

Namport said it has welcomed more than 4500 ship-borne visitors since the beginning of 2020. Another five vessels are expected during the remainder of January.