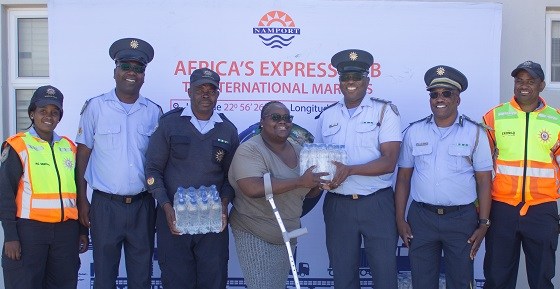 Caption: Chief Inspector Patrick Muhita (second from left) received 42 cases of water from the Namibian Ports Authority for the officers on duty at the Yanni Savva police station during the summer holiday. The water was presented by the ports authority’s Public Relations Practitioner, Ms Edith Kukuri (middle) while Inspector Okamaru (centre right) helped holding the gift. With them are the Namibian Police officers of Walvis Bay who will be on duty at this vital safety check point.

The police checkpoint at the Yanni Savva police station opposite Afrodite Beach just outside Walvis Bay is expected to be a hive of activity this holiday season as the Namibian police work round-the-clock shifts to enforce road safety.

Helping the policemen and women on duty, is the Namibian Ports Authority who this week donated 42 cases of water for use by the officers on duty.

The Yanni Savva police station, built by Mr and Mrs John and Rula Savva in honour of the memory of their son Yanni, is the main traffic checkpoint on the notorious seaside road between Walvis Bay and Swakopmund. This road has claimed dozens of victims in the past.

“Namport is the fourth company to join as a sponsor for this festive period,” said the Chief Inspector adding that initiatives of this nature serve as tokens of encouragement to the officers as they usually work long hours.

The roadblock which operates from the Yanni Savva police station will conduct operations focusing on roadworthiness of vehicles, driver fitness as well as general vehicle inspection.