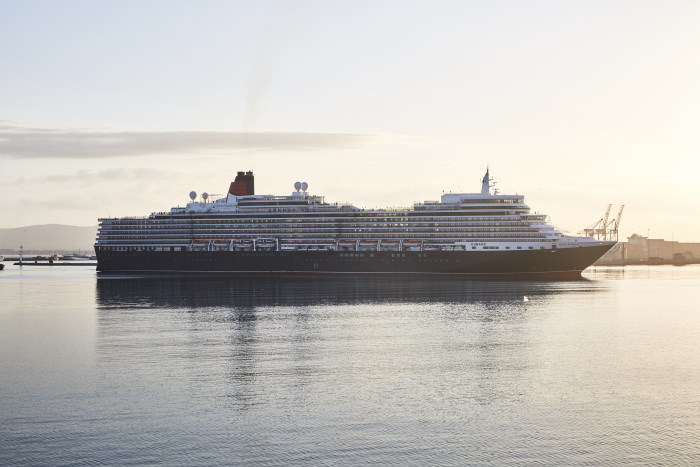 It’s not our intention to document or comment on every cruise ship call made at African ports this summer, as it would leave little time for anything else. This being the early days of the season however means that some leeway can be allowed. This was, after all, the week that Queen Elizabeth came visiting. The Namibian port of Walvis Bay has a new terminal jetty built specifically for cruise ship calls and it is fitting that among the first ship’s to call was Cunard’s QUEEN ELIZABETH which docked on Sunday, 17 November.

With 1915 passengers on board in addition to the 998 crew members the ship arrived in the early hours for a nine-hour stop at this unique port. Queen Elizabeth was arriving from Santa Cruz de Tenerife and the passengers made use of the opportunity of visiting local tourist attractions.

Later that afternoon the stately ship sailed for her next port of call, Cape Town. On her berth with the bunker tanker alongside.   Picture: TNPA

Queen Elizabeth was warmly welcomed back to the Port of Cape Town on Tuesday, 19 November, taking her berth at the cruise terminal. Her current voyage started in Copenhagen, Denmark on 1 October and she will also sail to Port Elizabeth on Friday, 22 November.

Queen Mary 2 is expected to call in Cape Town, Port Elizabeth and Durban in late March to early April 2020.