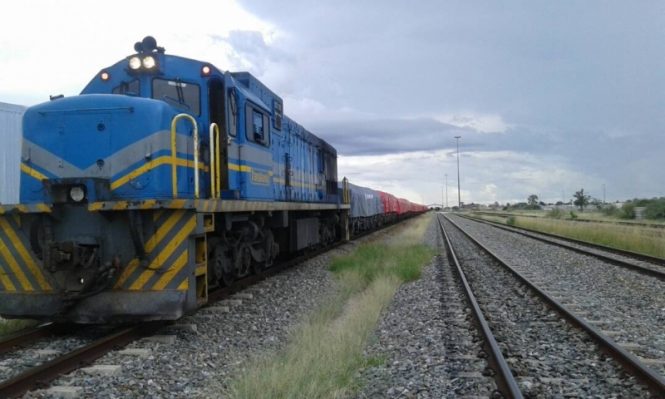 Throughout the world, rail transport is recognised as an environmentally friendly form of transport and a safer form of transporting bulk cargo in particular. Ohorongo Cement and Transnamib Holdings achieved these goals together through its partnership which stretches over the past 9 years.

With the construction of the Ohorongo Cement plant, major focus was placed on building an environmentally friendly plant, and at the inception stage already, provision was made to accommodate rail transport at its premises. The plant now boasts a multi-faceted private siding with two independent sections designed for inbound and outbound shipments.

Transporting goods by rail is considered the ‘greener’ option. Ohorongo Cement lives by its word to be environmentally responsible. As such, it transports some of its locally procured raw materials used in the cement-making process to the plant, as well as locally produced cement products to its customers nationwide, by rail. This means less fuel per ton, resulting in less carbon emissions into the environment.

The mode of transport is also cost-effective and very efficient. Larger quantities are transported with Transnamib on standard transport schedules, ensuring on-time deliveries and customer satisfaction. Through using rail transport, the company assists in alleviating road congestion. Having fewer trucks on the road, reduces motor vehicle accidents, a major concern for Namibia. It also means fewer repairs and maintenance to the road infrastructure, again ensuring safe and unobstructed passage for motorists.

The Ohorongo and Transnamib partnership comprises of coal transportation from the Walvis Bay Port to Otavi, as well as palletized cement for central, southern and northern regions. Special logistics arrangements have been made by Transnamib to ensure consistent and on-time delivery with additional train service between Tsumeb and Ondangwa / Oshakati.

These shipments to the north of Namibia are exclusively transported by rail due to the high traffic volume between the towns. “We highly value our relationship with Ohorongo Cement as their increased utilisation of rail transport has allowed for the implementation of our road-to-rail strategy which has resulted in a reduction of approximately 150 trucks on the road between Tsumeb and Ondangwa,” said Zebby Mukungu, Marketing and Sales Manager at Transnamib.

Sion Amalovu, Logistics Manager at Ohorongo Cement, shared these sentiments, by confirming the constructive partnership and said that they are looking forward to bigger, innovative projects with Transnamib to ensure that products are delivered timeously, while roads and environment remain safe.

Strategic logistics and warehouse planning are incorporated in this partnership for long term business dealings.