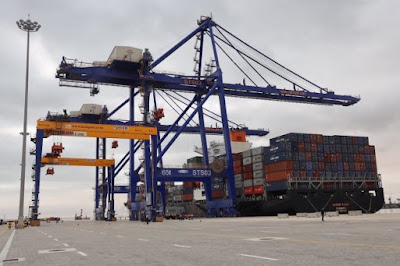 Namibia has inaugurated a new Chinese-built port terminal which doubles its container capacity and is also to give tourism a boost.

The 40-hectare platform reclaimed from the sea at Walvis Bay, some 400 kilometres west of Windhoek, is to become a strategic gateway to emerging markets of southern and west Africa.

The terminal was built by the state-owned China Harbour Engineering Company with funds from the Namibian government and the African Development Bank.

The cost of the installation was R4.2 billion rand.

“The completion of the container terminal expansion puts us on a firm trajectory towards realising our dream of transforming Namibia into an international logistics hub,” President Hage Geingob said at Friday’s inauguration ceremony.

A ‘State of Logistics’ report released by the Walvis Bay Corridor Group last year said the new terminal would increase the capacity of the port to 750,000 containers per year from 350,000 with the potential to go over a milion in the future.

Geingob said “Zambia, Angola, Democratic Republic of Congo, Botswana, and Zimbabwe are among the main land linked, now sea-linked markets for seaborne transit cargo by volume going through the port of Walvis Bay”.

The terminal also includes a dedicated cruise liner berth and a marina breakwater which “strengthens our capacity to attract tourists to our shores”, he said.

According to a 2018 finance ministry report Walvis Bay has been handling around 3,000 vessels and six million tonnes of cargo every year.