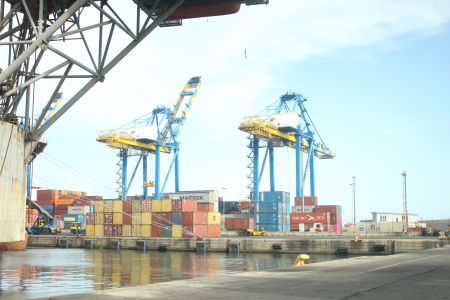 ACCRA, 21 OCT (NAMPA) ? Namibia and Ghana share a similar vision to expand and enhance port efficiency, transit growth, achieve larger volumes of cargo for more trade and become the gateways to landlocked countries within their regional trading blocs.
It was noted during a visit by Namport officials to the Port of Tema on Friday that despite being part of different economic blocs and having different markets, their visions for ports are the same.
Namibia has two ports - the Port of Walvis Bay and the Port of Lüderitz managed by the Namibian Port Authority (Namport) established in 1994, while Ghana has the Port of Tema and Takoradi Port in Accra.
The expansion of the Walvis Bay Container Terminal is expected to enable Namport to handle one million twenty-foot equivalent units (TEU) stated capacity, compared to in 2000 when it could only handle 20 000 containers per year.
Namport?s Manager for Terminal Planning, Widux Mutwa said 40 hectares of land were reclaimed from the sea, which would add 750 000 TEUs that is expected to be completed this year in terms of civil construction, while completion of the container terminal is expected by May or June 2019.
The African Development Bank (AfDB) gave Namibia a loan of N.dollars 2.98 million in 2013 for the container terminal expansion to increase the container handling capacity from the current 355 000 TEUs to up to 1 005 000 TEUs.
?We are a big country but a small population in terms of the economy. For us to sustain the infrastructure in terms of cost, we need to look beyond the Namibian borders and that is where our landlocked countries such as Botswana and Zambia come in,? Mutwa said.
He added that Namport was also focused on transit cargo to find investments and get better returns.
Tema Port, which is the largest port in Ghana, handles about 14 million tonnes of cargo every year.
Senior Marketing and Public Affairs Officer of the Port of Tema at the Ghana Ports and Harbour Authority, Isaac Tawiah said the port had a handling capacity of 800 000 TEUs which grows by four per cent annually.
?We realised that there is a need to expand the port and that is why it is being expanded. Once the expansion is completed, Tema?s capacity will be 3,5 million TEUs and each berth will be 350 metres, whereby we are getting four banks,? he said.
The water depth will have a 16-metre draft to accommodate bigger vessels into harbour.
The project costs about U.S. dollar 1.5 billion and completion is expected by June 2020.
(NAMPA)
ANS/PS/AS