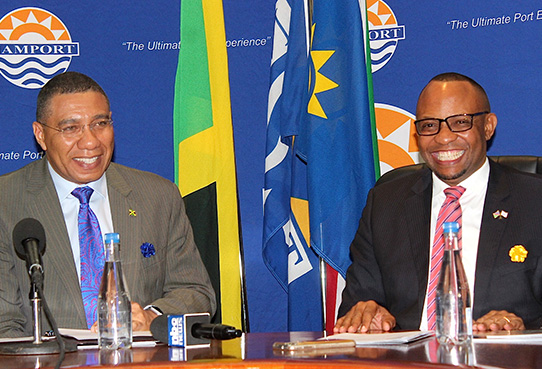 Jamaica has two main ports and several smaller ports, and is situated along some of the world's busiest shipping routes.

“The port is such a valuable asset, and it was nearly inconceivable to turn it over to private hands. But we had to ask whether it can do better with people who have more viable business connections. After all, they cannot take the port away from us, but they can bring better management, and increase the value of assets and revenue,” Holness told Namport CEO Bisey Uirab during a visit at the port of Walvis Bay yesterday.

Holness arrived in Namibia for an official state visit on Sunday, and is accompanied by 11 other government officials, including the minister of culture, gender, entertainment and sport as well as the director of the bilateral relations department in the ministry of foreign affairs and trade.

He said it took his government time to harmonise the move, which today isshowing a lot of economic potential.

After a competitive tendering process, the Jamaican government divested some of its public port to the CMA CGM Group, which is the third-largest ship liner in the world.

This move resulted in the port more than doubling its cargo capacity from 1,6 million units per year to 3,6 million within five years. It also allowed the government to spend more money on dredging operations to deepen the port to be able to accommodate massive Panamax cargo vessels along one of the leading global shipping routes through the Panama Canal.

“Now, we are expecting to become a major player in the global transhipment sector,” Holness indicated.

“Because of the divesting, better investments are now being made than when it was just in the hands of the government. These private shareholders have the connections, syndicates, conglomerates and experience. It is because of this that we can develop to where we intend to go. I am not giving advice, I am sharing my experience.”

Uirab responded that Namibia was also “thinking about such a route” (regarding private port terminal operators), although the country would first learn from others and thus eliminate challenges. He said Namport and Jamaica share similar stories. Therefore, there are many avenues of cooperation, and the hope is that the two countries' ports could prepare a memorandum of cooperation specifically concerning tourism via ocean liners and projects such as port expansion, industrial parks' development and operational efficiency.

“There might be a case for a much closer working relationship. It might be necessary that we look at some collaboration between us, and explore how to benefit from one another,” said Uirab.

He described the history of Namport, and the significant investments being made in the container terminal expansion, fuel storage facility and Gateway port expansion for it to become the logistics hub of southern Africa as it already opened trade routes for landlocked neighbours.

Holness said he was very impressed by all that Namibia managed to achieve so far by “utilising its independence to get economic freedom”.

“We are proud of what you have achieved, and I am encouraged and will tell our people to pay close attention to the economic development of Namibia primarily, and Africa in general,” he noted.