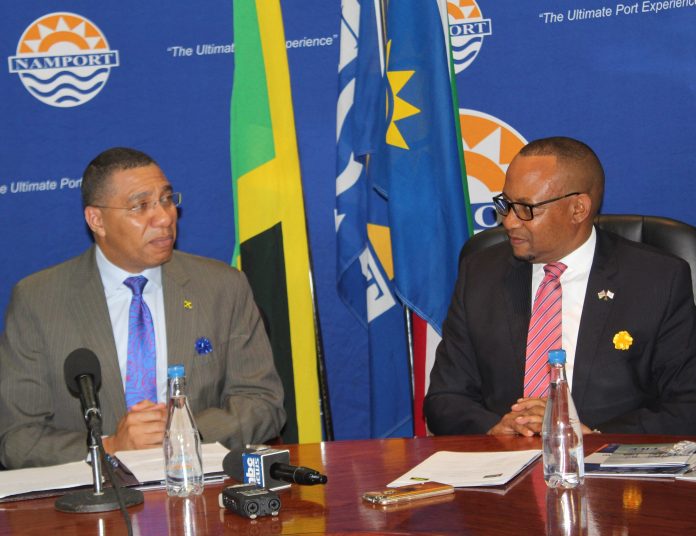 Jamaica has become a role-model for several countries around the world since it implemented its PPP policy in 2012, which saw the country
completing five major projects, three of them in renewables, with a total investment value of about N$16 billion.

Jamaica also entered into a public private partnership with Kingston Freeport Terminals Limited, an affiliate of French shipping company
CMA CGM, for 30 years. This deal included an upfront payment of about N$970 million, with annual concession payments of N$195 million

Hence, Uirab says, Namibia should foster a Memorandum of Understanding with Jamaica to source expertise and guidance if it so happens that Namibia goes in private partnership for ports management.
/Uirab made the remark during the official visit of the Jamaican Prime Minster Andrew Holness to Walvis Bay yesterday. Holness toured the
Walvis Bay new container terminal as well as the new fuel storage terminal during his visit.

According to /Uirab, Namibia’s vision for Namport as well as the vision that Jamaica has for its ports are very similar as they are currently also
doing exactly what Namibia is doing in terms of expanding their ports.
“We are looking at making our ports more effective and efficient and that is exactly what Jamaica has done as well. Although PPP discussions in
terms of Namport are still at its infancy, Jamaica has successfully done it. Hence, we stand to gain from their experience and lessons if we go
through with it,” he said.

Holness, who was impressed with the progress Namibia has made so far in terms of the expansion project, also shared his advice in terms of
PPPs, saying it improved port efficiency and would relieve pressure off government while generating revenue at the same time.

“We are aiming at handling 3.5 million containers within the next five years, by capitalising on our central location in the Caribbean. We want to
clear a container with the same speed Usain Bolt is known for,” he said, jokingly referring to retired Jamaican sprinter and world record holder in
the 100 metres, 200 metres and 4 × 100 metres relay.

He added that Jamaica is ready to assist Namibia in any way possible and will share expertise so that Namport, a public enterprise, reaches its
full potential.