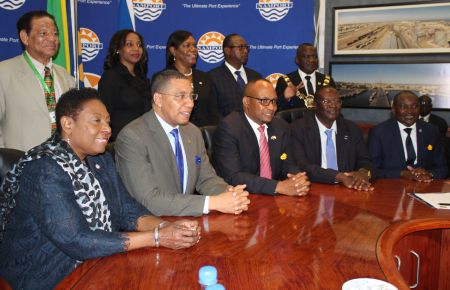 Jamaican Premier Andrew Holness is impressed with the economic progress Namibia has made over the last 28 years and believes that his country, and Caribbean counterparts can learn a great deal from the country.

Holness said this during his tour to the Namibia Ports Authority (Namport) facilities in Walvis Bay on Tuesday.
"You have utilised your independence to create the economic freedom and I think the people of the Caribbean represented here by me are all very proud of what you have achieved," said Holness.
The 46-year-old leader urged his Caribbean counterparts to pay close attention to Namibia's economic progress in particular and Africa's in general.
He was particularly struck by Namibia's beautiful scenery and the hospitality he received.
The Prime Minister was equally impressed with the Port of Walvis Bay, mentioning that efficiency and speed are key, if countries have serious intent to grow their logistics operations.
I have told bureaucrats and the technical people that you celebrate the speed of Usain Bolt. But we now need the speed of clearing a container from the port. Because that will be a symbol and signal of our economic progress in the same way Usain Bolt is a symbol of our athletic prowess, he noted.
He then extended an invitation to Namport's Chief Executive Officer (CEO) Bisey /Uirab and Erongo Governor Cleophas Mutjavikua and their teams to Jamaica, which was instantly accepted.
At the same juncture, /Uirab hinted to the singing of a string of memorandum of understandings (MoUs) between the two countries in areas of cooperation.
Specifically, he said MoUs ought to be signed between the two countries to gauge how they can work together in the areas of logistics, sports and tourism.
We are also a country that relies heavily on tourism and you are doing the same. We, for example, have to work with big tourism companies that are marketing these various tourism destinations, he explained.
/Uirab continued: And Jamaica has done remarkably well in terms of sports. Why can't Namibia benefit from that.
The two countries in the capital earlier on Monday signed an MoU to facilitate sport development.
Minister of Environment and Tourism Pohamba Shifeta, who was part of the Namibian delegation that accompanied Holness and his entourage to the Erongo Region, also shared hopes for cooperation in tourism matters.
We have discussed a bit and we also concluded that it is good for Namibia and Jamaica for their ministers of tourism and environment to come together and come up with an MoU just to cement some of these talks, he told Nampa.