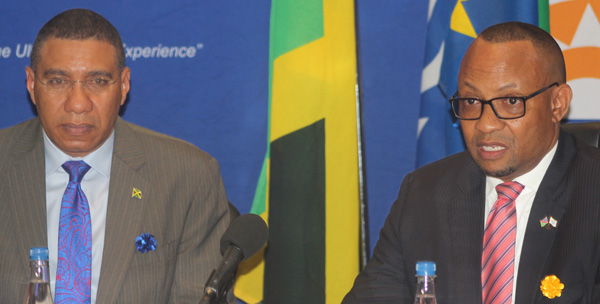 The Jamaican Prime Minister, Andrew Michael Holness complimented Namibia Ports Authority (Namport) in its significant strides, it has made after attaining its independence and using such a platform to attain the economic freedom it has thus far attained.

The Jamaican official echoed this during a visit Namport hosted for the delegates in the Erongo Region, this week.

The Premier who has been on a state visit concluded his journey by visiting the Erongo Region where he and his delegation met Namport’s Chief Executive Officer, Mr Bisey /Uirab and other regional political and business leaders.

The CEO highlighted the fact that Jamaica and Namibia share a lot of similarities such as both countries having their own ports as well as the great reliance on the Tourism industry as a big contributor to both countries’ Gross Domestic Products.

It is this reason of the shared commonalities in Port administrations that Namport was seen as a worthwhile entity to host the Jamaican delegation within the Erongo Region.

“Namibia’s government made very conscious efforts years ago to develop and invest in the Port of Walvis Bay as a commercial port not only for the country but also as a port that would serve the interest of the entire SADC region most especially countries that are land linked,” /Uirab added.

Meanwhile, through the visit, the two leaders are looking at specific future collaborations and the CEO was further invited to visit Jamaica for further deliberations between the two countries with particular emphasis on the Maritime sector.