South Africa: a Hub for Marine Aids to Navigation Training 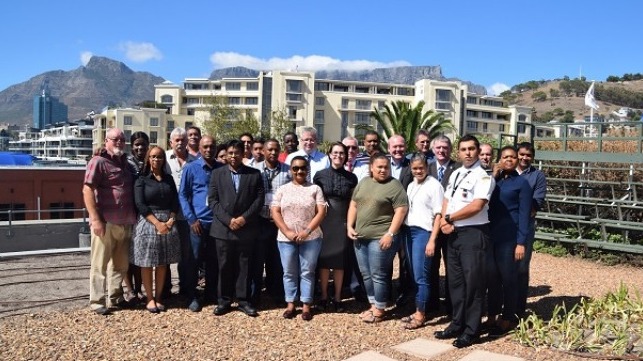 South Africa is emerging as a hub of training in marine aids to navigation (AtoNs) for other developing countries keen to establish their maritime transport sector as a safe, secure and environmentally sound pillar of socio-economic growth. This was clear from an address by David Gordon, Executive Manager: Lighthouse and Navigational Systems (LNS) of Transnet National Ports Authority (TNPA) at the Pre-Conference Forum of the 19th IALA Conference in Incheon, Republic of Korea on May 26.

IALA is the International Association of Marine Aids to Navigation and Lighthouse Authorities and is the only international body concerned with the provision of AtoNs at sea and on inland waterways. The Pre-Conference Forum was jointly hosted by the independently funded training and capacity building tool of IALA, the IALA World-Wide Academy (WWA), in partnership with the Korean Ministry of Oceans and Fisheries.

Gordon, who previously served as IALA President from 2010 to 2014, addressed the forum on the topic of the South African experience of providing AtoN Management training.

He said: “South Africa is recognized as the center of excellence in Africa with regard to AtoNs. It is therefore important that South Africa leads the way in ensuring that the African continent on the whole is led by competent individuals and organizations in order to achieve compliance with international legislation.”

In 2018 Gordon spearheaded Transnet’s successful hosting of two IALA training events in Cape Town - the first IALA Risk Management Seminar on the African continent in the English language, hosted from February 26 to March 2, 2018 and the first IALA Level 1 Aids to Navigation (AtoN) Manager training, held from March 5 to 29, 2018.

“The courses were developed by IALA and presented all over the world in English, French and Spanish. The course has also been adapted through a collaborative process with the South African Maritime Safety Authority (SAMSA) and the Transport Education and Training Authority (TETA) in order to align it with the National Qualifications Framework,” said Gordon.

The seminar was targeted at those involved in the design, marking and management of waterways. It provided an international and regional overview of risk management within the port environment, and stressed the importance of stakeholder liaison, the value of the IALA Risk Management Tools (software) and national administrations in waterway planning.

The 27 participants included 23 TNPA employees within the portfolio of the Chief Harbour Master and four international delegates from the International Harbour Masters Association, Namibian Ports Authority, the General Directorate of Maritime Affairs in Guatemala and Madagascar’s Maritime and Fluvial Port Agency.

All the participants completed the seminar and were presented with certificates of completion.

This training targeted those who fulfill the role of Aids to Navigation Managers in the Competent Authorities of Coastal States or their Aids to Navigation service providers. The four-module course aimed to enable participants to gain an internationally recognized Aids to Navigation Certificate as a basic AtoN Manager, with competencies including technical functions of visual, radio and audible AtoN, Vessel Traffic Services, AtoN provision, design and management, and maintenance, contracts, environmental matters and human resource issues.

The theoretical training was delivered by Francis Zachariae, Secretary-General of IALA, Gerardine Delanoye, Programme Manager of the IALA WWA and TNPA-endorsed experts.

A total of 13 participants attended from South Africa, Ghana, Kenya, Namibia and Madagascar. Sivayogan Moodley from TNPA LNS was one of only two delegates who received a First Class Pass or a minimum average of 75 percent across all modules. Captain Naresh Sewnath, TNPA Acting Chief Harbour Master, presented the certificates at the closing ceremony on March 29, 2018.

Gordon said TNPA is provisionally booked to host the Level 1.1 AtoN Manager training in Cape Town from March 25 to April 18, 2019. He is also optimistic that TNPA and South Africa will be able to offer the Level 2 Technician training in future and also provide VTS training to the wider region.

The products and services herein described in this press release are not endorsed by The Maritime Executive.