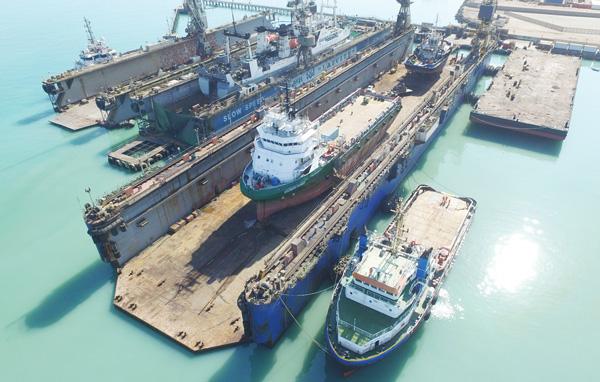 A change in shareholding in the Walvis Bay drydock operator which has long been suspected, was confirmed this week when Elgin Brown & Hamer  announced they have divested their shareholding in this key industrial facility.

The Namibia Ports Authority (Namport) remains the control shareholder while a new group styled as the Elgin Brown & Hamer Consortium has taken over the shareholding of the EBH parent, the DCD Group.

The DCD Group has relinquished its full share to the consortium, a group that was initially only described as “prominent Namibian business leaders.”

“As a result, the 47,5% shareholding held by EBHC is now effectively in the hands of Namibian-owned companies. As of Monday 2 April 2018, the DCD Group relinquished all shareholding in EBHN,” EBH stated when announcing the conclusion of the transaction.

Since EBH Namibia was founded 12 years ago, it is estimated to have had a downstream impact of about N$8 billion.

EBH Namibia’s woes started when the price of crude tanked in 2015 affecting the revenues of the western Africa oil and gas sector. The company had to retrench a large part of its workforce in 2016 followed by more retrenchments in 2017 and the departure of the former Chief Executive, Hannes Uys. In the meantime, the company was nominally steered by an acting Chief Executive, Ms Heritha Nankole Muyoba.

During 2016 EBH experienced a collapse of its clientele, booking a 50% decline in dockings. This prompted the first round of restructuring. Despite several notable jobs in 2017, the ship repair company could not improve its balance sheet.

Commenting on their operations during 2017, EBH Namibia then stated: “While it is true that EBH Namibia carried out several key maritime that is, non-oil and gas projects ranging from fabrication and Special Periodic Survey work to major repairs (steelwork, pipework, docking and underwater repairs), it should be noted that revenue streams are not constant and that our profit margins and turnover are under enormous pressure in the ongoing effort to remain viable and cost-competitive for our clients.”

EBH said this week the joint management agreement with Namport will remain in place.