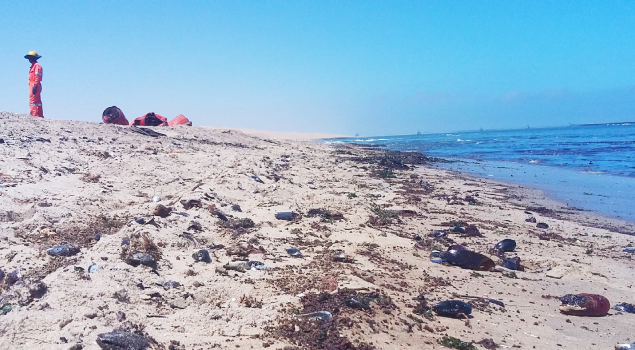 WALVIS BAY - The Minister of Environment and Tourism, Pohamba Shifeta, had the opportunity to see and experience first-hand how officials from various government agencies and organisations deal with an oil spill at the coast.

The minister was on a visit to the coast when news of another oil spill spread through the coastal community. A second oil spill was detected in the fragile ecosystem of the Walvis Bay Lagoon, an internationally recognised RAMSAR coastal wetland area.

The minister visited the shore of the lagoon with prominent Walvis Bay business personality, John Sava, and officials of the harbour town’s munici­pality over the past weekend to see how a biodegradable absorption agent is spread on the water to disperse the oil on the surface of the sea water.

Officials from the Namibian Ports Authority and the Directorate of Mari­time Affairs are again trying to verify the origin of the spill. It is the second instance where heavy fuel oil was detected in the water of the Atlantic Ocean within a week.

Although the scale of the second oil spill seems much smaller than the first instance at the Afrodite Beach residential development a week ago, officials were doing everything in their power to minimise the effects of the pollutant on sea and bird life. Residents of Walvis Bay have already reported oiled birds along the shores of the lagoon which will have to be captured and treated to preserve their lives.

In this regard the DMA requested the public to report any other oil spill that they may come across in and around Walvis Bay and Namibia as quick as possible,especially if it looks like it has not yet been noticed by authorities. If and when an oil spill is detected, people should state what type of pollution it
might be or give the best description of the colour and smell of the pollutant and, if possible, an accurate location with the aid of a Global Positioning
Device or clear landmarks.