Port set to outshine others in Africa 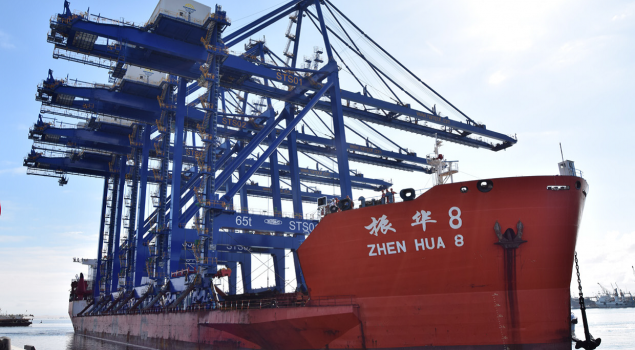 Thursday, February 15, 2018 - 14:45
News
History was made when four gigantic ship to shore cranes arrived in the port of Walvis Bay at the end of last week.
Not only is the heavy-lift ship Zhen Hua 8 the very first vessel to ever moor alongside the brand-new quay in one of the new berths in the new container terminal still under construction as part of the South Port Development, but the four giant ship-to-shore cranes are the first of their kind in Namibia.
The new cranes and the ship transporting them were welcomed with fanfare and a celebration to mark a very strategic milestone that Namibia reached in its economic development.
Chinese Ambassador to Namibia Zhang Yiming said during the welcoming ceremony that Walvis Bay is set to become the most brilliant pearl
on the Atlantic Coast of southwest Africa. “It can be said that this is the benchmark project for the friendly and pragmatic cooperation between China and Namibia. The arrival of the cranes and the harbour development which is nearing completion also symbolizes the great attention of our leaders to our relations and the brotherhood between our people,” Zhang said.
The ambassador said the arrival of the cranes is not only key to the port’s construction, but also indicates that the project is about to be completed soon. Chief Executive Officer of the Namibia Ports Authority, Bisey Uirab, said the ship-to-shore cranes are major components of the new container terminal project and their application is regarded as a milestone in the life cycle of the port as it is the very first time that this type of cranes is being deployed in Namibia. “The new ship-to-shore crane is the largest container-handling equipment ever in Namibia and will improve efficiencies and enable faster vessel turnaround times, which in turn will make our port and new container terminal more attractive for international shipping lines dealing with the Southern African Development Community,” Uirab said.
Uirab indicated that at a cost of N$110 million each, the total value and the acquisition of the cranes form roughly 10% of the total value of developing the new container terminal. The new cranes will improve dramatically on the capacity of Namport to load and offload containers once the new South Port Development will be inaugurated during 2019.