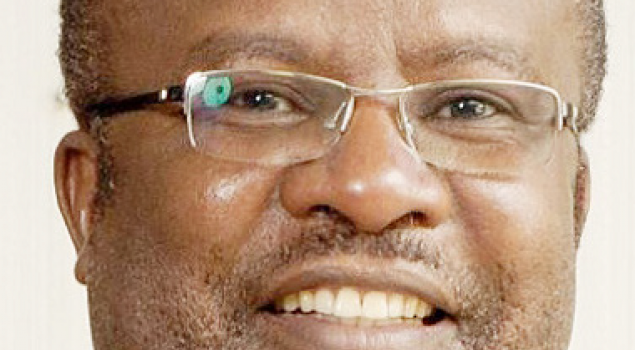 NamPower Managing Director, Kahenge Haulofu
Industrial development in and around Walvis Bay, with the new port expansion as a major driving force, will need electricity to run,
while Nampower seems reluctant to break its monopoly and accommodate private power producers.
As Namibia still imports the bulk of its supply from its neighbouring countries, supply security of the essential aspect of future economic
development remains in contention. Namibia will remain a net-importer of electricity until a fully functional base-load generation plant or midmerit power plant which is reliable, affordable and with adequate capacity to cater for the energy needs of the country is built.
The historical arrival of four giant ship-to-shore cranes in the port of Walvis Bay shed some light on the challenges that industrial development
might face with regards to secure and reliable electricity supply.
The Chief Executive Officer of the Namibian Ports Authority, Bisey Uirab, revealed that the four gigantic cranes alone will increase
the town’s electricity demand from 3, 5 mega Watt hours to almost 14 mega Watt hours once the pieces of essential equipment in the operation of the new container terminal will be put to use early next year. The capacity of the three main electricity generation plants, even at full production levels, are not enough to supply the demand of the Namibian Nation on a day-to-day basis. Hence the need to continuously
import electricity from the Southern African Power Pool under agreements with neighbouring countries and their national electricity
suppliers. The main suppliers are South Africa’s ESKOM, Zimbabwe’s ZPC and Zambia’s ZESCO.
NamPower Managing Director, Kahenge Haulofu, said the Ruacana hydro power station is currently not generating at full capacity because
of the low level of water from the Calueque Dam in Angola. The Van Eck power plant is currently kept as a standby generation plant should
there be generation constraints from the other generation plants and Power Purchase Agreement contracts. The Anixas plant in Walvis Bay is
a standby power plant, meaning it is only dispatched during emergency situations when the primary power supply is not available.
In the event that of one of the three interconnector lines that connects Namibia with South Africa and Zambia cuts out, the country
can still be supplied via the other two lines. With regard to ensuring dispatchable electricity supply in future he said NamPower’s current
five-year strategy is coming to an end in June 2018 but that the state owned enterprise has commenced with the process of crafting its
strategic intent, a process that will lead into the development of a new five-year Corporate Strategy and Business Plan.
“The crafting of the strategic intent, which is a comprehensive exercise, will include the determination of the generation supply
mix going forward, one which is intended to meet our goal of being self-sufficient within the medium and long term,” he said.
NamPower is working on a number of small generation projectswhich includes private participation (IPPs) to reduce the reliance on imports.