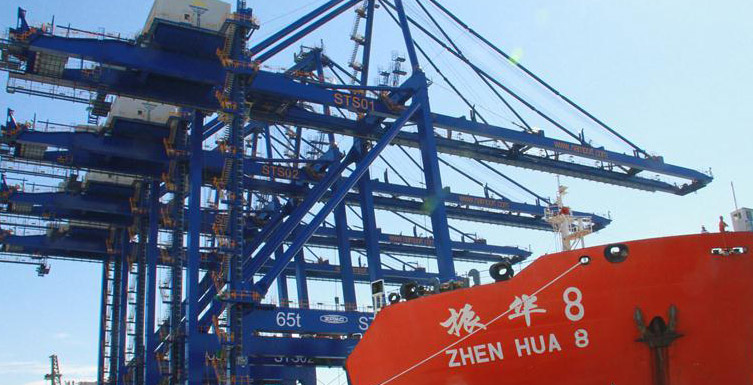 The country’s port in Walvis Bay is set to become the “most brilliant pearl on the Atlantic Coast of southwest Africa” with the delivery of four ship-to-shore (STS) cranes manufactured by China, the Chinese ambassador, Zhang Yiming said last week at the ceremony.

The cranes, manufactured by China’s Zhenhua Port Machinery Company, will be deployed at the new container terminal that is expected to be completed by mid-2019.

The project, developed by the state-run China Harbor Engineering Company (CHEC) since 2014, will have a throughput capacity of 750,000twenty-foot equivalent units (TEUs) per year.

Expected to be completed by mid-2019, the terminal will have two 600-meter-long berths and accommodate container vessels of 8,000 TEUs.

Zhang said the arrival of the cranes is not only key to the port’s construction, but also indicates that the project is about to be completed soon, making Walvis Bay the most splendid city on the Atlantic Coast of southwest Africa.

“It can be said that this is the benchmark project for China-Namibia friendly and pragmatic cooperation, which symbolizes the great attention of our leaders to our relations and the brotherhood between our people,” Zhang said.

Chief Executive Officer of Namport, Bisey Uirab said the ship-to-shore cranes are major components of the new container terminal project and their application is regarded as a milestone in the life cycle of the port as it is the very first time that this type of cranes is being deployed.

“The ship-to-shore crane is the largest container-handling equipment and will improve efficiencies and enable faster ship turnaround time, which will make our terminal attractive for shipping lines,” Uirab said.

Uirab said the cranes, each of which cost N$110 million, can attain a height of up to 70 meters during operation.

If the booms are raised, Uirab added, the crane’s height can reach 122 metres, while the boom reaching from the seaside leg will be 69 meters long.

Earlier this month, Namport said the container terminal currently under construction in Walvis Bay is 76% completed. The new port will also be connected to the existing port’s road and rail networks as well as communication systems. (Xinhua).