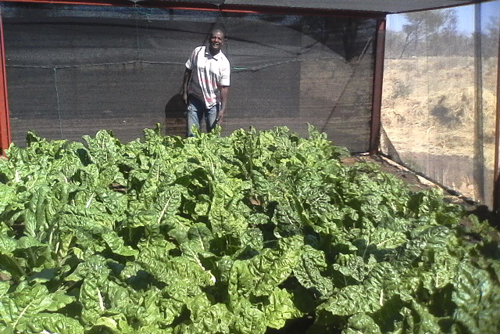 Good prospects… TOV technical adviser Rev Edward Amadhila at one of the spinach greenhouses ready to be harvested.

The Namibian Port Authority (NamPort) has funded the first-ever greenhouse project scheme in Tsumeb to produce spinach.
The project was undertaken by TOV HIV/AIDS Orphans and Vulnerable Children’s Organisation in Tsumeb. TOV provides shelter to vulnerable children living with HIV/AIDS including orphans.

TOV also runs a kindergarten and has a school scheme, whereby it enrolls children in school and pays school-related fees.
The first harvest from the greenhouse is expected to be ready by next week. The centre will then sell its first commercial spinach to the public. There are four greenhouses under production.

“Our plan is to have all four greenhouses producing spinach in the next three months and it is anticipated to generate between N$1,500.00 to N$2,500.00 each per week for the next 12 to 24 months,” stated TOV technical adviser Reverend Edward Amadhila.

Although it could not be ascertained how much Namport invested in the project, Amadhila believes that NamPort’s funding of the greenhouse project has the potential to move TOV out of poverty and onto the path of self-sustainability.

TOV was fortunate enough a few years ago to be allocated a 10 000 hectare plot at Farm Oerwood, some 10 km from Tsintsabis, through government’s resettlement programme.