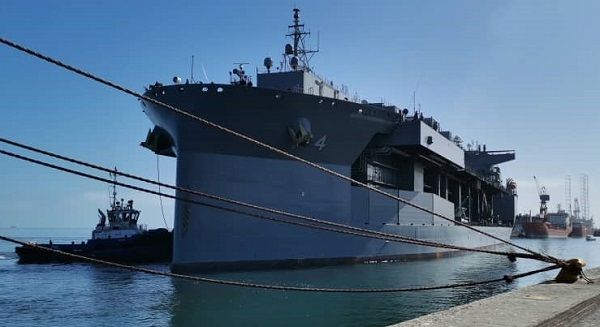 A United States warship en route from Luanda to Cape Town, used the opportunity this week to make a quick detour and dock in Walvis Bay harbour for three days.

The Defence Attaché in the United Stated Embassy in Windhoek, Lieutenant Colonel William Lange said “the United States Embassy is grateful for the tremendous support we have received from the President of Namibia, [the] Ministry of Defence and Veterans Affairs, [the] Ministry of International Relations and Cooperation and the Namibian Ports Authority. Without this crucial support, we would not have been able to bring the USS Hershel “Woody” Williams to Walvis Bay.”

While in Namibian waters, the USS Herschel W. Williams will participate in training exercises with the Namibian Navy, amongst others, landing a navy helicopter on board the ship, running a “board, search and seize” exercise, and a combined navy passage exercise.

On the sidelines, US military personnel will use the opportunity to discuss maritime safety in the South Atlantic with their Namibian counterparts.