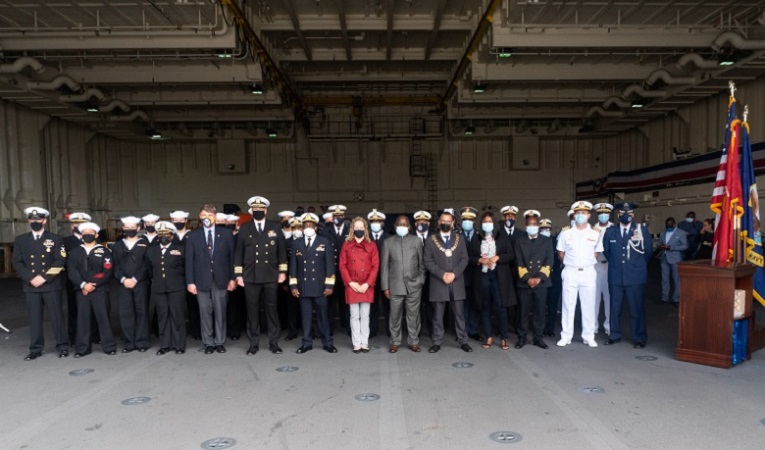 Officers and crew from the Namibian and U.S. Navy on board the USS Hershel “Woody” Williams. 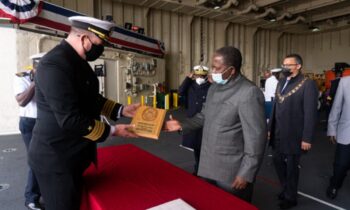 Captain (Navy) Chad Graham presents the USS Hershel “Woody” Williams’ ship crest to the Honorable Frans Kapofi, Minister of Defence and Veterans Affairs of Namibia, to commemorate the inaugural visit of the vessel to Namibia.

Walvis Bay – The USS Hershel “Woody” Williams arrived in the port of Walvis Bay on September 16th for a three-day visit to conduct joint exchanges with the Namibian Defence Force and to welcome Namibia’s military leadership to an onboard reception.

The USS Hershel “Woody” Williams is a Lewis B. Puller-class expeditionary sea base (ESB). The vessel docked at Walvis Bay as a part of a deployment, which has taken it to several ports along Africa’s west coast.  The ESB class vessels provide a multi-role platform that can support a broad range of missions, ranging from troop deployments to other humanitarian support missions.

The USS Hershel “Woody” Williams is the first U.S. Navy vessel permanently assigned to the U.S. Africa Command area of responsibility.  Its mission is to conduct bilateral and multilateral naval engagements in the Mediterranean Sea and the waters surrounding East, South, and West Africa, thereby showcasing our shared commitment to promoting security and stability on the African Continent.

“Congratulations to the Namibian side! This friendly competition built comradery between the two navies, further enriching the bilateral military relationship between the United States and Namibia,” said  Lieutenant Colonel William Lange, U.S. Defense Attaché to Namibia.

The ship also hosted U.S. and Namibian senior military and government leaders on board for a tour and reception.  Among the many distinguished guests were Captain Chad Graham, Commanding Officer of the USS Hershel “Woody” Williams, United States Chargé d’Affaires Jessica Long, the Honorable Frans Kapofi, Minister of Defence and Veterans Affairs, Rear Admiral Alweendo Paulus Amungulu, Commander of the Namibian Navy, and His Worship Trevino Forbes, Mayor of Walvis Bay. During the tour, the ship’s crew showcased the ship’s robust capabilities and discussed the ship’s diverse combat and peacetime mission sets. During the reception, the U.S. and Namibian delegations gave remarks and conducted a gift exchange to commemorate the inaugural visit of the ship to Namibia.

The visit concluded with a joint U.S.-Namibian Navy communications drill.  The Namibian Grajaú class patrol boat launched in support of the USS Hershel “Woody” Williams departure and the US and Namibian Navies exercised their ship-to-ship and ship-to-shore communications interoperability.

Namibia has been an essential partner in the Obangambe Express exercise series, which is the largest multilateral maritime exercise on the west coast of Africa. Over the course of the visit, senior military and government leadership discussed future U.S.-Namibian engagement.

“This exercise not only highlights  U.S.-Namibian military interoperability but lays the foundation for future bilateral maritime operations,” said U.S. Chargé d’Affaires Jessica Long.  “The United States looks forward to Namibia’s participation in Obangambe Express 2022 and future such exercises.  This visit showcases the important partnership between the United States and Namibia, as well as a shared commitment to ensuring security, safety, and freedom of navigation in Namibian and south Atlantic waters.” Both sides also noted that the ship’s visit to Walvis Bay Port not only demonstrates a common commitment to  Namibian security, but also furthers mutual economic interests by ensuring unfettered access to global markets.