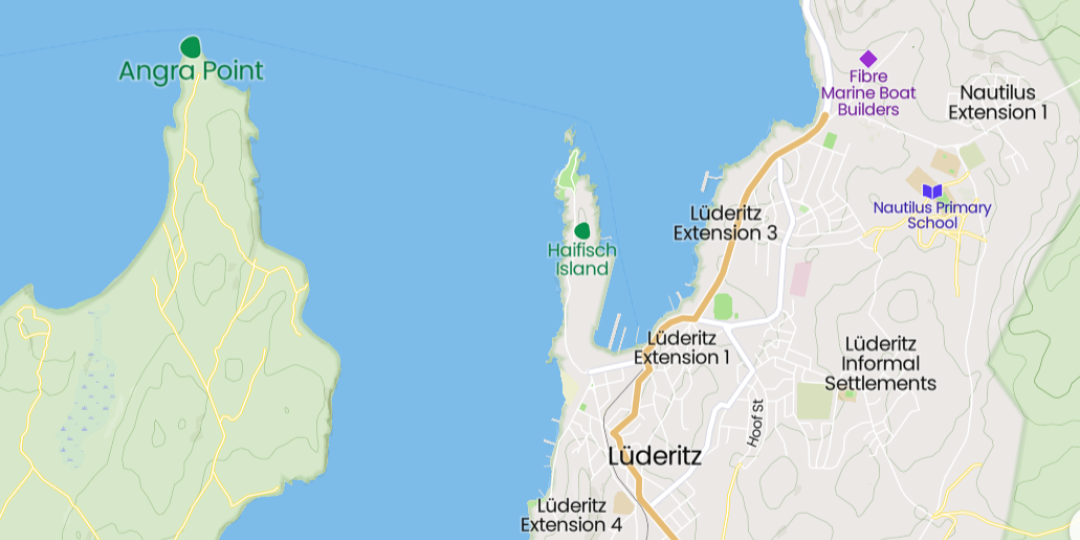 The location of Angra Point, west across the bay from Lüderitz, where Namibia is thinking of building a deepwater port.

The shallow-draught challenges faced by the Port of Lüderitz, where iron ore outflows from South Africa’s manganese fields have highlighted the potential of the former fisheries-only harbour, could be overcome if Namibia built a new deepwater port at Angra Point across the bay.

In an interview with Freight News, the CEO said since the railway line through the southern Namib Desert had been reopened a few years ago, the success of manganese exports had manifested in demand for more diversified cargo.

“When we started looking at increasing volume through Lüderitz there was a lot of scepticism as it was mainly used for fishing.

“It wasn’t really used for deep-hull cargo, but we looked at it again and realised it could yield better results.”

Out of necessity though, cargo capacity at Lüderitz will have to be expanded if the port wants to carry on punching above its weight.

"The port’s manganese success story”, Tjivikua explained, “has shown that when you move large volumes of cargo, often it leads to requests to scale up.”

Doing that, he said, required alternatives to the port’s shallow, hard rock-bed.

“Lüderitz is small, but if we can develop Angra Point, things are going to be much more efficient, bringing in more kinds of cargo other than manganese.”

More specifically, the WBCG has its eye on heavy-hauling citrus from the same region as the manganese sent to Lüderitz – the Northern Cape Province in South Africa.

“Citrus has been on our radar now more than ever,” Tjivikua said on his recent visit to Sandton in Gauteng, mere weeks after South Africa’s port and rail infrastructure first found itself under attack by insurrectionist forces before falling prey to a country-wide cyber breach.

However, should Lüderitz muscle in on South Africa’s citrus market, a world leader in terms of exported volumes, space and draught depth would not be its only challenges.

“It’s a time- and temperature-sensitive cargo and we would want to ensure that all the cold-chain checks are in place.”

It would require upgrading current cold-chain facilities that, by Tjivikua’s own admission, were not designed for high volumes of fruit.

“The Northern Cape is a perfect fit for the Port of Lüderitz along the Trans-Oranje Corridor. Also the Port of Walvis Bay. The table grape season is coming up and would give us a perfect opportunity to work with the citrus growers and secure proper supply-chain service.”